The National Capital Region Transport Corporation (NCRTC) this past week initiated the civil bidding process for the construction of the 92.05 km Delhi – Ghaziabad – Meerut Regional Rapid Transit System (RRTS) line which in the future will have trains running at speeds of up to 160 kmph to bring end to end travel time down to 48 minutes.

In a tender notice published in local newspapers, bids have first been invited for the construction of two packages on the 18 km Ghaziabad (Sahibabad – Duhai) portion of the line, which will be entirely elevated with 4 stations at Sahibabad, Ghaziabad, Guldhar and Duhai.

Stations on this line are proposed to be an average of 5.4 km apart. Their exact locations haven’t been revealed to the public yet, and it appears that the Mohan Nagar Station has been dropped. In October 2017, an additional station at New Ashok Nagar (abutting Noida) was added to connect up with Delhi Metro’s Blue Line.

Rough alignment of the Ghaziabad section – 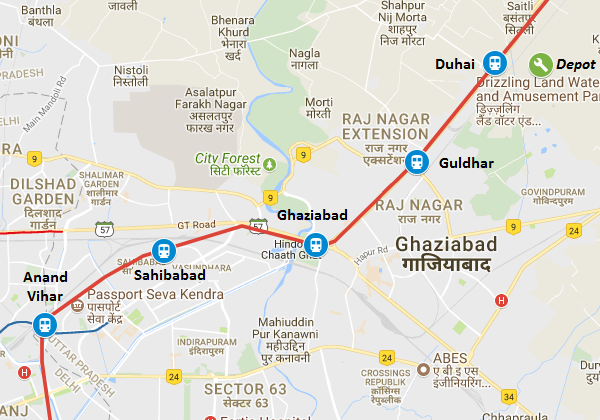 The tender notification hasn’t been uploaded on NCRTC’s website yet. As per the newspaper notice, tender documents will be on sale between February 26 and April 16 (12 noon) after which the bids will be opened and first evaluated for eligibility at 3 pm. More info (estimated cost, duration) will be added here when the complete online notice is available.

Feb 26 Update – tender notices are now available online – Package 1 & Package 2. Package 1 estimate: Rs 488 crores and Package 2 estimate: Rs 568 crores. NCRTC would like work on both to be completed in 910 days.

Back in December 2017, the NCRTC had held a meeting with interested bidders. Here are some notes from their powerpoint slides, some of which might be dated –

The line’s detailed design consultants mentioned above are Egis Rail – INECO – Egis India, who were appointed in August 2017.

For more updates, check out the NCR RRTS section of The Metro Rail Guy!