The final round of safety inspections on the new 11.182 km elevated extension of Delhi Metro’s 18.46 km Green Line (Line-5) between Mundka in Delhi and City Park in Bahadurgarh (Haryana) will be held on May 30 by Shailesh Kumar Pathak – the appointed Commissioner of Metro Rail Safety (CMRS) from the Indian Railways’ Northern Circle.

This date was conveyed in a letter sent on Monday afternoon (May 21) by the Commissioner of Railway Safety, under the Ministry of Civil Aviation, to the Managing Director of the Delhi Metro Rail Corporation –

This will be the 9th time an inspection is held for commissioning any section of the 162.5 km Phase 3 project. In the upcoming inspection, the CMRS and his team will visually inspect the line’s elevated viaduct, tracks and all facets of the stations such as its PA system, signage, safety features, drinking water facilities, station access and control room.

Testing on this section initially began between Tikri Kalan and City Park stations (a distance of roughly 6.5 km) in December 2017 and full length testing commenced in February 2018. The line follows NH-10 towards Rohtak and its structure is fairly straight without any major twists or turns.  This new extension has a total of 7 stations of which four are in Delhi—Mundka Industrial Area, Ghevra, Tikri Kalan and Tikri Border, and three are in Haryana – Modern Industrial Estate (MIE) , Bus Stand and City Park. 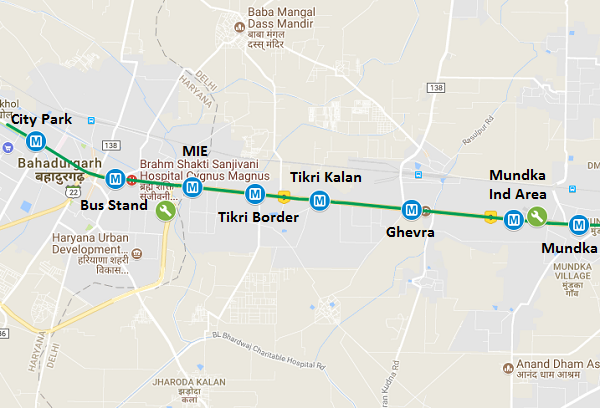 Due to land acquisition issues, the new Bahadurgarh Depot (west of MIE Station) still remains unconnected to the main-line. As such, the DMRC with their limited number of 6-coach trains at the existing Mundka Depot plans to run services with an extremely high headway of 20-25 minutes on this stretch. Here’s what the MD said in a recent interview to the TOI –

We will open the line very soon, but full services will not be available. We will have truncated services because we can’t hold the number of trains in the existing depot. Till such time we have connectivity to the depot, we will run truncated service. But since connectivity with the depot is not there, we will have fewer trains available. We might run them at an interval of 20 or 25 minutes, which is actually no service by metro’s standards.

After its inauguration, about 98.52 of Phase 3’s 162.5 km routes will be operational and the entire network will become about 289 km long with 206 stations. The Green Line will become 29.64 km long and make Bahadurgarh the 3rd town in Haryana to have metro connectivity after Gurgaon and Faridabad.