The first train for Gurgaon’s second phase has finally made its way from the shores of China!  This train is part of 7 trains that were ordered by Rapid Metro Rail Gurgaon (RMRG) to run on the new 6.5 km southern extension of the line in addition to the existing 5 trains. These trains have been built by CSR Zhuzhou Electric Locomotive Works on a subcontract from Siemens. 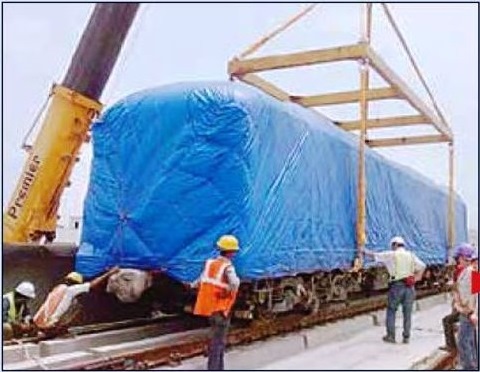 New train being unloaded from a trailer – photo: Dainik Jagran

All 7 trains are expected to be in Gurgaon by the end of this month (See: New Train-Sets for Gurgaon Metro’s PH-2 to Arrive by Month-End).  When the southern extension is completed and opened by September 2016, this will bring the Gurgaon Metro to 11.6 km with 12 stations, operated by a fleet of 12 train-sets.