Dismal Tunneling Progress Made by Bangalore Metro in Last Month

The BMRCL released their September 2015 newsletter on Tuesday and things don’t look quite good. In fact they look horrible. Apart from TBM Krishna’s breakthrough at Chickpet (See: [Pics] TBM Krishna Finally Makes a Breakthrough at Chickpet), there’s really nothing to celebrate about. My September 1 tunneling update on the tunneling works provides a brief description & work left to be carried out by each TBM to complete the north-south Green line, but here’s the “official” look at the progress made by each TBM down to the meter.

• TBM Godavari – This TBM was supposed to restart tunneling within a few days of Krishna’s breakthrough, but there is no official word on it in the September newsletter.
Distance left: 621 meters

• TBM Margarita – Since the August newsletter in which 769 meters were tunneled out of 973 meters, it is now reported to have tunneled 804 meters indicating a meager progress of 35 meters.
Distance left: 169 meters

• TBM Krishna – After breaking-through at Chickpet on August 31, this TBM is currently being dismantled and will  hopefully be relaunched on the other end of the station  in mid October to complete the northbound tunnel.
Distance left: 747 meters

• TBM Kaveri – Since the August newsletter in which 324 meters out of 747 meters were tunneled, it is now reported to have tunneled 353 meters indicating an awful progress of 29 meters.
Distance left: 394 meters

Adding all the distances left together gives a grand total of 1931 meters. At the depressing rate at which they’re going, it doesn’t look like tunneling will end by 2017! Add another year for track laying, third rail installation and CMRS certification and we would be looking at the north-south line being operational only in 2018. 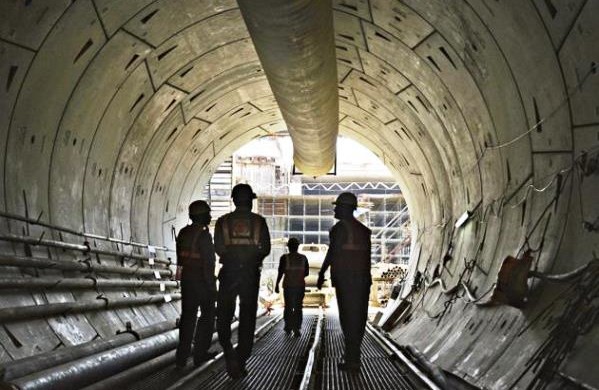 Besides the poor performance of the core tunneling work on the north-south line, other ancillary works on the east-west Purple line do not provide much optimism.

• Out of 100 Alumino-Thermic welds, they performed only 1 weld since the August newsletter and now are left with 23 welds.

As you can see, the progress highlighted in the September newsletter is awfully poor and does not agree with the statements made by the BMRCL’s MD, Pradeep Singh Kharola, right after Krishna’s breakthrough at Chickpet:

All the four tunnels will be completed by February-end and will all culminate at Majestic station which will then pave the way for commercial operations to begin on Phase I in March-April.
source

At the rate at which they’re tunneling, February-end does not seem feasible, so you really have to wonder what’s going on. Either the MD is lying through his teeth to the media or he’s actually not aware of the tunneling rate being accomplished down-under, both of which are unacceptable and highlights the incompetence of the Bangalore Metro’s management. By now, I’m sure you can see how the MD & BMRCL are taking the citizens of Bangalore for a ride…the wrong type that is.