After Jaipur, Nagpur will soon have a double decker viaduct!

The National Highways Authority of India (NHAI) and the Nagpur Metro Rail Corporation  (NMRCL) have together designed a 3.41 km double decker viaduct where a flyover for automobiles will be built on the first level and the metro line will run on the second level. The metro line will be roughly 40 feet above the ground and will include three stations. As per the plan, they will also build foot-overbridges at various locations above the metro line which to me seems too far fetched and won’t be executed.

To give you an idea of what it will look like, see this image from Jaipur: 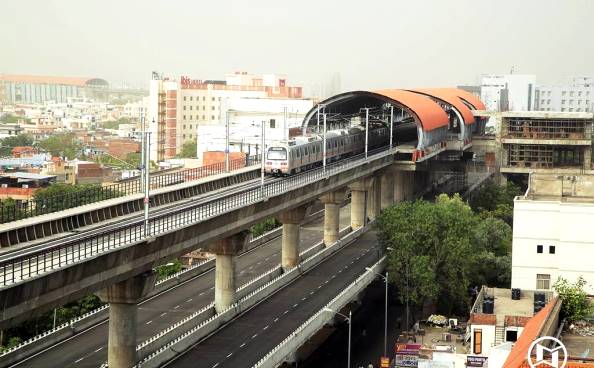 This double decker viaduct will be built on the north-south line on Wardha Road from Ajni Square to the Airport road’s “T-point” intersection as shown by the black line below: 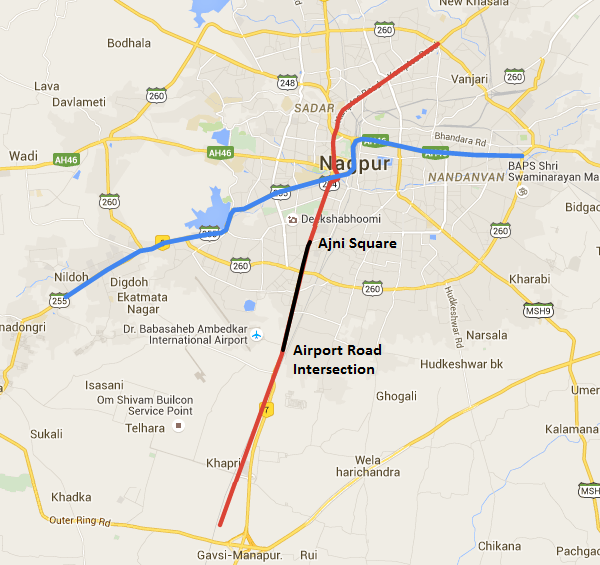 In an interview to the TOI, Mr Brijesh Dixit, the MD of NMRCL had to say this:

NMRCL and NHAI have finalized the designs of 3.41km stretch and also of three metro stations. We have signed on a common map finalized by the two agencies. Now we can begin work on the project’s Reach-I stretch between Munje square, Sitabuldi and Airport via Congress Nagar, Rahate Colony and Wardha road within three months. This is second stage of the project. Already, work on first stage– 5km at grade stretch between Airport and MIHAN has started in May.

First metro rail’s two corridors were planned– North-South and East-West. NHAI then came up with a plan to construct 3.41km-flyover from Ajni square to Airport T-point. It came as a challenge for us and also NHAI. Such a situation arose only in Jaipur metro as of now. Now we too are ready to tackle similar situations on Kamptee road where NHAI has planned three flyovers and also at Pardi.

As for the metro’s alignment:

After KfW sanctioned a Rs 3716 crore loan (See: KfW Bankengruppe Sanctions Rs 3,716 cr Loan for Nagpur’s Metro), they will now sanction another loan for Rs 444 crore loan for building a solar park to generate electricity and for developing a feeder service to the metro. For the remaining loan component of the project’s cost, the NMRCL will soon sign up with France’s Agence Française de Développement (AFD) for a Rs 962 crore (130 million euro) loan. Teams from both KfW and AFD will be visiting Nagpur in October to inspect ongoing works and will then finalize the loan agreements.