I recently posted details of how Chennai’s Central (railway) station will soon become a hub for transportation with access to the local/state buses, metro, MRTS and the suburban rail system – See: Chennai’s Central Station to Become a Transport Hub.

Now more details have emerged on the new Central Square that is touted to become a “landmark” for the city. On September 16, the Chief Minister of Tamil Nadu unveiled an ambitious plan for  developing a “world class” square in the vicinity of the Chennai Central station to ensure a free flow of traffic, pedestrians and commuters through both underground subways and overground open space & walkways. Once the metro station is built underneath the Poonamallee High Road by 2017, tenders for Rs 400 crore Central Square will be floated. The Corporation of Chennai will be in-charge of landscaping the areas and will coordinate with the Chennai Metro and Chennai Metropolitan Development authority. 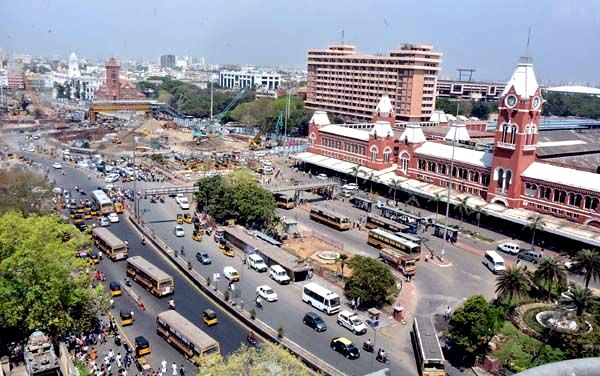 Besides a fountain, a 3 level parking structure for 500 cars and 1000 two wheelers will also be built for users to park and ride the Metro to their destinations. The plan also includes a large open public space that will connect to Government General Hospital, the MRTS at Park Town and suburban railway at Park station, Southern Railway’s headquarters and other places in the vicinity. In all, they will landscape 8 acres and remove encroachments to make way for a pond, cafeterias and outdoor recreational space.

Here’s a cool video that my twitter follower Prashanth shared which shows the concept design of the Central Square. It’s from 2014, so I imagine that changes would have been made by now and will continue to be made until the final ‘product’ is ready. But in any case, enjoy the video!