At the first coordination meeting of the metro project held on Friday between the Amaravati Metro Rail Corporation (AMRC), District Collector and various departments, the AMRC’s Managing Director announced that the 12.76 km Line 1 from Pandit Nehru Bus Station (PNBS) and Penamaluru on Bandar Road will pass over the proposed Benz Circle flyover at a height of 18m above the ground!

The Benz circle flyover from Screw Bridge centre to Nirmala Convent Road has been proposed for many years and was recently approved in July by the Central Government since two national highways cross each other. 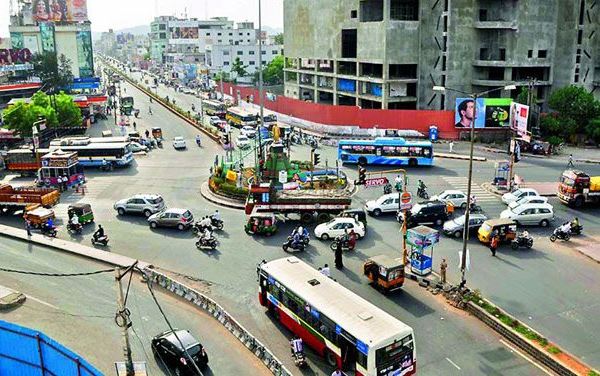 As a reminder, tendering is currently underway on the project’s Line 2 from Pandit Nehru Bus Station (PNBS) to Nidamanuru and will be wrapped up in December. Earlier, the last date for submitting bids was November 20, but that has now been extended to December 7. The civil construction contractors will then shortly be announced!

Contract AMCC-02 – The second notification invites tender for the design and construction of an elevated viaduct (km 1.338 to km 6.577) and five elevated stations at City Cancer Hospital, SRR Government College, Sri Sathya Sai Mandir, Besant Road and Railway Station East side. The cost for this section is estimated to be Rs. 314 crore.

Both of these sections can be viewed in the map below:

The Central government’s deadline for the project is April 2019, but the CM of Andhra Pradesh, N Chandrababu Naidu, has asked the project to be completed by December 2018 itself which to me isn’t impossible if work starts in January as planned.