So remember the Memorandum of Understanding signed on September 18 by the Mumbai International Airport Pvt. Ltd. (MIAL) and the Mumbai Metro Rail Corporation (MMRC) for MIAL to contribute Rs 777 crore towards the construction of 3 stations of the 33.5 km Colaba-SEEPZ line within the Airport’s land at Mumbai? Well, guess what? MIAL is not going to pay that from its pocket, but has instead proposed to charge an additional development fee on passengers flying out of Mumbai.

The proposal which is currently awaiting the Airports Economic Regulatory Authority (AERA)’s final approval has suggested an additional Development Fee of Rs 15 for each embarking domestic passenger and Rs. 75 for each embarking international passenger. This fee would be on top of the Development Fee of Rs. 100 and Rs. 600 that MIAL currently charges on passengers flying domestic and international routes respectively out of the city.

As a reminder, the 3 stations for which the fee will be levied are all located within the Airport’s land and include CSIA Domestic, Sahar Road and CSIA International. These stations are part of the contract package MM3-CBS-UGC-06 from Chainage: 23900m to Chainage: 28388m for which the J.Kumar Infraprojects Ltd & China Railway No.3 Engineering Group Co. Ltd JV emerged as the lowest bidder when the financial bids were opened on October 5. Here are the locations of these stations on a map I’ve made: 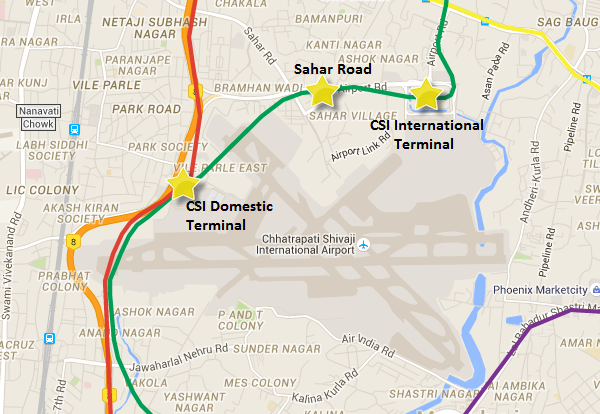 Location of 3 stations in the Airport’s premises

Although MIAL had proposed to levy this fee for a period 4.5 years starting as early as November 1 2015, AERA has suggested January 1 2016 as the start date. Once suggestions from all stakeholders are received by November 26, it will take a final decision on the fee’s amount and start date.

If you’re interested to know more about the CSIA International (T2) station – its location and initial design renderings of the GVK Skycity commercial district that will be built around it, then check out this post.