This past Saturday, I ran a post on how the Delhi Metro’s Guru Dronacharya Station was recently renamed to include ‘Indigo’ after Indigo Airlines successfully put in the highest bid for the semi-naming rights of the station as part of the Delhi Metro Rail Corporation’s re-branding initiative to generate some extra revenue through 9 stations located in the National Capital Region. This initiative allows corporates to bid and include their brand name as a prefix or suffix to the existing station’s name in addition to receiving advertising rights within it.

Now as per @rsrikanth05, one of my first few followers on Twitter who runs a fabulous in-depth blog focused on Mumbai’s BEST services called BESTpedia, the MG Road (Mehrauli – Gurgaon and not Mahatma Gandhi as one would assume!) station has been renamed to include SYSKA after Pune based SYSKA LED put in the highest bid for renaming the station in April this year.

@rsrikanth05 DMRC has not announced the winners, so this is news to me! When you get a chance, please try taking a snap.

Here are a couple of images from Srikanth which show the change: 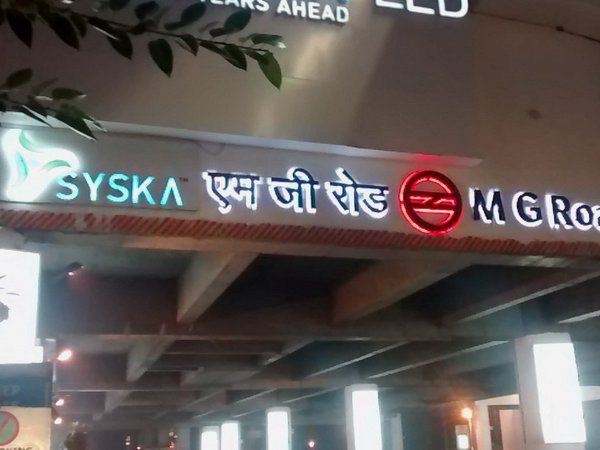 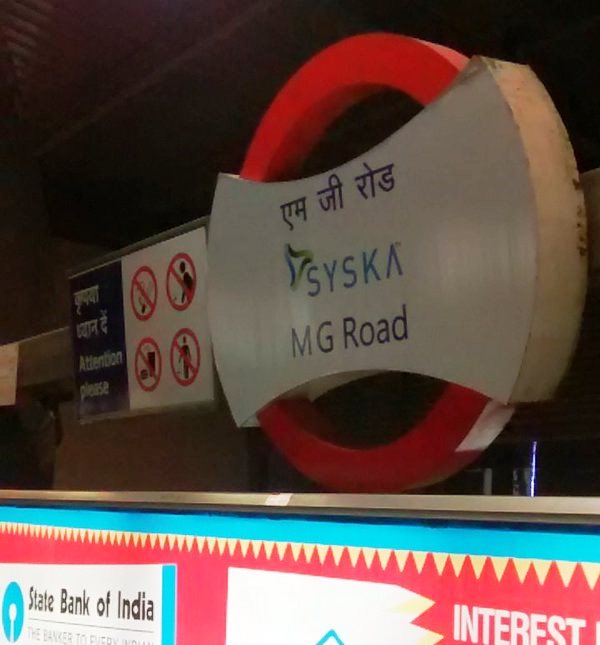 One of the roundels located on the platform level – Photo Copyright: Srikanth

With this station rebranded, the remaining 5 stations awaiting rebranding are all located outside of Delhi due to restrictions in Delhi and none in Uttar Pradesh & Haryana, and include stations at Vaishali, Golf Course, Botancial Garden, HUDA City Centre and IFFCO Chowk.

As a reminder, Gurgaon’s Rapid Metro was the first operator in the country which offered  station naming rights. Some of the station on its 5.1 km line are called Indusind Bank Cybercity, Vodafone Belvedere Towers and Micromax Moulsari Avenue after various brands put in the highest bid. Following Gurgaon & Delhi’s example, the Noida Metro Rail Corporation in December 2014 announced that they will similarly auction the station naming rights along the 29.07 km Noida – Greater Noida metro line prior to it opening in late 2017. For regular updates on that line, please see this page.