5 years (no typo!) after the Tamil Nadu state government approved the 9.051 km extension of Chennai Metro’s Airport-Washermenpet line to Wimco Nagar, Venkaiah Naidu – the Union Minister for Urban Development yesterday announced that the Ministry of Urban Development has now also given its approval for the line. The MoUD’s approval was necessary since the Chennai Metro project has & is being implemented as a 50:50 joint venture between the Government of India and the Government of Tamil Nadu.

The approx Rs 3,770-crore line with 8 new stations will run underground from Washermenpet to Korukkupet and then turn into an elevated line via a ramp. In October 2014, the alignment of the line was finalized with the addition of a new station close to Sir Theagaraya College between Washermanpet and Korukkupet.

Alignment of the line: 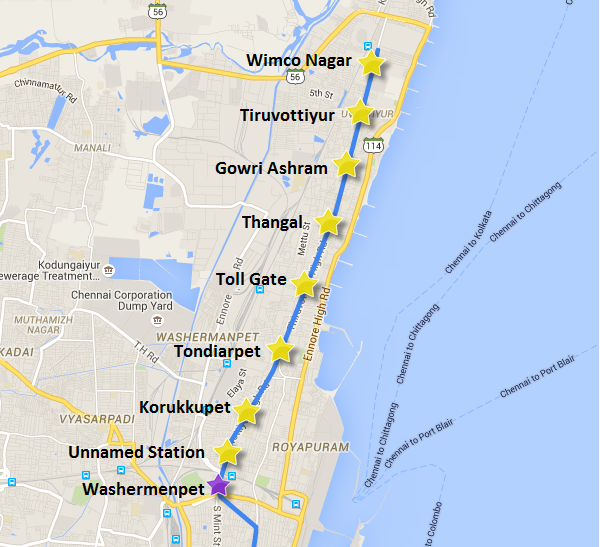 Alignment of Chennai Metro’s extension from Washermenpet to Wimco Nagar

The Chennai Metro Rail Ltd (CMRL) has already started work to identify land/properties which will be acquired for road widening. They’re also exploring the possibility of building a depot somewhere along this stretch in addition to another depot planned south of the Airport. Since the land near the airport is owned by the Ministry of Defence, getting an approval for that will not be easy.

In September of this year, Systra Consulting was appointed as the Detailed Design Consultant  (DDC) to conduct a study and present a detailed report on this extension. According to a CMRL official, Systra will:

With the MoUD’s approval now given, the project has been sent to Public Investment Board (Ministry of Finance) for their clearance and the CMRL can now begin the tendering process to hire civil construction contractors. After this extension opens in 2020, the line from the Airport to Wimco Nagar will become 32.061 km long!