More than a year after construction on the Lucknow Metro project started (see: construction updates), yesterday, the Union Cabinet chaired by Prime Minister Narendra Modi approved (see: press release) Lucknow Metro’s 22.878 km Phase 1 from Munshi Pulia to the Airport with 22 stations! The cost of the project is estimated to be Rs. 6,928 crore of which the Government of India will pledge Rs 1,300 crore in the form of equity and subordinate debt.

I must highlight that the 8.3 km priority stretch from Charbagh to Transport Nagar which will be operational by March 2017 is currently under construction entirely with funds provided by the Uttar Pradesh state government.

This approval from the union cabinet is significant since this along with the Public Investment Board’s approval in August 2015 will now make sure the project receives ~ Rs 4800 crores of funds from both foreign lenders (Agence Française de Développement & European Investment Bank) and from the central government to construct the remaining sections of the line from Charbagh to Munshi Pulia and from Transport Nagar to the Airport.

Map with important sections of the line marked below: 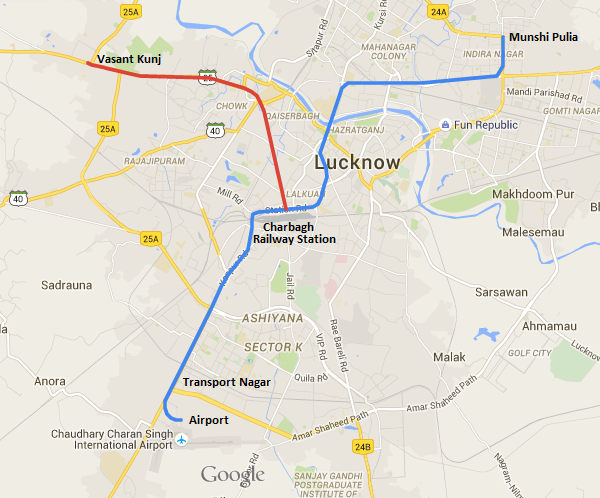