Following the recommendation by an expert committee formed by the Maharashtra government, the Mumbai Metro Rail Corporation (MMRC) will now be responsible for executing the elevated 11-km Jogeshwari – SEEPZ – Kanjurmarg metro line. In official circles, this line is referred to as Metro-6/Line-6 and earlier it was believed that the Mumbai Metropolitan Region Development Authority (MMRDA) would execute it. This decision was made so that pre-construction work is streamlined and not duplicated in the SEEPZ and JVLR areas where both lines will intersect to form an interchange and possibly integrate, pending the recommendations of the line’s Detailed Project Report (DPR). 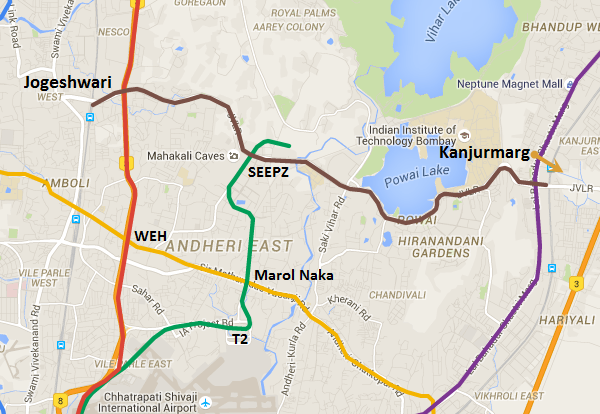 The decision to entrust the MMRC with this line’s execution was first brought up in October when the Chief Minister, Devendra Fadnavis, accepted the expert committee’s report which recommended to build a depot for the upcoming 33.5 km Colaba-SEEPZ line at Kanjurmarg instead of at Aarey Colony where activists (not local residents, mind you) have been protesting its construction. This recommendation involved extending the line by 9 km to Kanjurmarg on the same alignment as that of the Jogeshwari – SEEPZ – Kanjurmarg line and such recommended that the MMRC handle it.

MMRC’s Managing Director, Ashwini Bhide, had this to say to the Asian Age:

It was suggested by the state government to handover the Metro 6 corridor to MMRC and we are now waiting for the updated DPR by the DMRC, as the earlier one was drafted by the MMRDA and it will be better if it is updated. We will take major decision on the alignment and also the plans about integration with Metro-3 will only be decided after the DPR is out.

The Detailed Project Report (DPR) for the Jogeshwari – SEEPZ – Kanjurmarg is expected to be submitted by the Delhi Metro Rail Corportation by the end of this month following which it’ll be revealed whether the two lines will be integrated or not.

The decision to appoint the MMRC is an excellent choice since I believe all metro lines should be executed by one dedicated nodal agency for effective coordination like it has been the case in other cities. As we all know, too many cooks spoil the biryani and as things stand right now, all new metro lines in Mumbai are being executed by a mix of different agencies:

I’ve avoided mentioning line numbers since the MMRDA has made a complete mess of them.  For example, the Dahisar (E) – Andheri (E) line is sometimes referred to as Line-5 and sometimes as Line-7.

While the DMRC was roped in by the government to help speed up the implementation of Mumbai’s Metro, it’s quite absurd that the MMRDA, which has been responsible for dragging key lines of the project for the last 7-8 years, has been retained to execute two and possibly more future lines. It was only after a push from the new government that the MMRDA recently invited tenders for the civil construction of the Dahisar (E) – Andheri (E) line, but this job really should have been entrusted to the MMRC as the MMRDA’s core competency is to execute flyovers and sell land parcels around the city. Now that there’s no going back, one can only hope for excellent coordination between the MMRDA and MMRC since their respective lines will connect with one another at Jogeshwari and Kanjurmarg.

For more updates on Mumbai’s Mumbai, check out the Mumbai section of the Metro Rail Guy!