The Chennai Metro Rail Ltd just published their December 2015 newsletter with in-depth tunneling data recorded up till December 31 from all 5 ongoing tunnel sections of the first phase of the project!

Before diving into the data and analyzing it, let’s take a look at a couple of images from the elevated section: 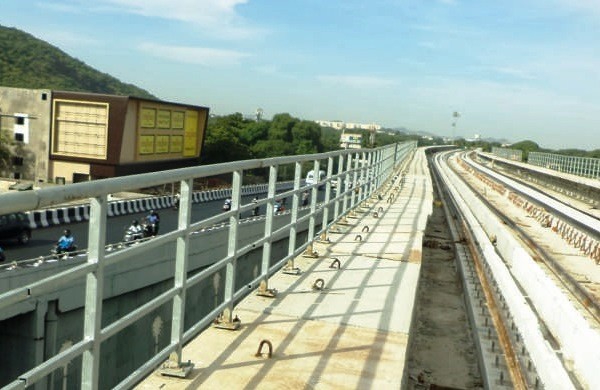 Viaduct close to the Airport station ; OHE work is yet to begin – Photo Copyright: CMRL

For reference, here’s a map with all 6 underground sections of the 1st phase of the Chennai Metro project. Of these, barring UAA08 (in yellow) that was just approved, the rest are ongoing. The elevated and cut & cover sections of the project have been marked in grey.

• This section includes tunnels from Washermenpet to Egmore and from May Day Park to Central with stations at Egmore, Chennai Central, May Day Park, High Court, Mannadi & Washermenpet.
• Tunneling by the Afcons-Transtonnelstroy JV between Washermenpet & High Court was completed in 2014.
• A total of 5 tunnels are left to be constructed:

• The down-line tunnel between the May Day Park and Central stations will be completed as soon as the receiving shaft is ready at Central. As of January 18, the TBM is just 10m away from making a breakthrough!

• A TBM on the up-line tunnel was launched from Egmore towards Central in December. Another TBM for the down-line will be launched on the same section next month. Check out some images of both TBMs being prepared.

• The Gammon-Mosmetrostroy JV had abandoned tunneling work in May and the CMRL will soon initiate the tendering process to complete the balance work. Out of 3616m of twin tunnels, only 1835m and 1700m have been completed.

• This section includes tunnels from AG-DMS to Saidapet with stations at Teynampet, Nadanam and Saidapet.

• The Gammon-Mosmetrostroy JV had abandoned tunneling work in May after which Afcons Infra was temporarily roped in to complete the last breakthrough in September. Recently, L&T was tasked with completing the balance civil work at all stations.

• This section includes tunnels from Egmore to Shenoy Nagar with stations at Nehru Park, Kilpauk and Pachaiyappa’s College. Tunneling work by the L&T-SUCG JV has been completed and currently track work & systems installation work is going on.

In December 2015, the CMRL invited tenders to construct this 2.4 km underground section from Washermenpet to Korrukupet with stations at Sir Theagaraya College and Korrukupet. This section is part of the 9 km extension from Washermenpet to Wimco Nagar that was approved by the Ministry of Urban Development in early December 2015. Bids will be opened on February 4 after which a contractor will be appointed. I expect ground work to start in Q2 2016 and tunneling work to commence in Q1 2017 with operations on the entire 9 km extension starting in 2020.

Looking at the progress made and the fact that the November-December 2015 rains slowed down the project which now requires a re-design to be undertaken at some places, I expect the entire 45.1 km phase 1 to be operational only in 2018. In the meanwhile, the CMRL hopes to start services on the elevated Alandur – Airport and Alandur – St. Thomas sections in 6 months from now. Looking at recent images of different stations and the progress made within, I don’t believe that’ll be possible and estimate these two sections will start commercial operations only by the end of the year.