CMRL to Open 3 Sections of Chennai Metro in 2016

After opening a 10 km stretch from Koyambedu to Alandur in 2015, officials from the Chennai Metro Rail Ltd who recently interviewed with the Times of India revealed that 3 sections of the 2 metro lines are expected to open by August 2016! These 3 sections include: 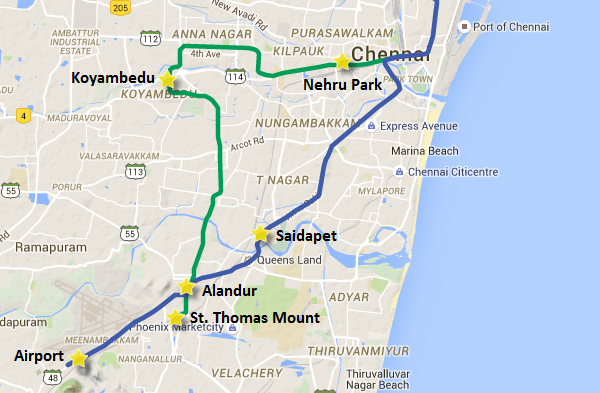 Line 1 – In October 2015, the CMRL had claimed to have started trials from the OTA station to Little Mount on the Airport-Saidapet stretch, but that turned out to be nothing more than a simple run to see if the tracks were fit for operation. Although track work is mostly complete, signalling & electrification works have only recently commenced and are expected to be completed by April.

Line 2 – In October 2015, the CMRL ran a OHE wagon from the Thirumangalam Ramp to Anna Nagar Tower station to again see if the tracks were fit for operation. Since then, the OHE wagon has made its way to Shenoy Nagar & back, but really has contributed nothing, and I mean nothing, towards the opening of the line’s underground section which has been completed between Thirumangalam ramp (north of Koyambedu) and Nehru Park.  As per CMRL, the Thirumangalam Ramp to Shenoy Nagar stretch will be electrified by the third week of this month and the Shenoy Nagar to Nehru Park section by May.

Now, as far as openings go, there are multiple variables at play which’ll determine when these sections will open up. These include how quickly track + signalling + electrification works can be completed, how quickly in-station interior works are completed (note: the St. Thomas Mount station is far from complete), how quickly the trials can be completed, how quickly the Commissioner of Metro Railway Safety (CMRS) conducts the requisite safety inspection & gives its approval, and lastly the availability of ministers to inaugurate the sections. So if you were to ask me, August 2016 seems a little too ambitious, but I do believe these sections will open by the end of the year.