The Metro-Link Express for Gandhinagar & Ahmedabad (MEGA) has invited bids (see notice) for Package-4B from infrastructure / construction companies to construct 5 elevated stations on the 4.85 km Motera – Ranip section of Ahmedabad Metro’s 17.23 km north-south line! Tenders for this section’s viaduct (Package-4A) were invited in August 2015 and while the winning company (lowest bidder) has been found, an announcement about it is yet to be made.

The 5 stations which the successful bidder will have to construct are Motera, Sabarmati, AEC (Ahmedabad Electricity Company), Sabarmati Railway Station and Ranip. 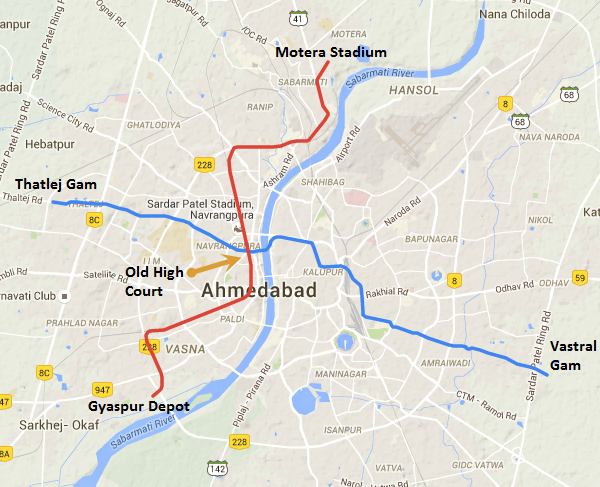 The pre-bid meeting with interested infra companies will be held on February 29 2016 and the last date for submission of tender documents for bidding is 3 pm on March 29. Following that, the bids will be opened & evaluated at 3:30 pm. After the contract is finalized, piling work for this section of the line can be expected to begin as soon as June 2016.

The 4.62 km southern section of the line from the Gyaspur Depot to Shreyas was awarded to IL&FS Engineering in December 2015 following which Gujarat’s Chief Minister laid the line’s foundation stone on January 17 2016. With the northern section’s bidding process now completely underway, MEGA will next invite tenders for constructing the 7.76 km mid-section of the line between Shreyas and Ranip which will include the crucial Old High Court interchange station. Whenever that happens, I’ll make sure to post about it.