I shared part of this with my Twitter followers yesterday and am reproducing it here as well. At the time of writing this, the Bangalore Metro Rail Corporation Ltd. is yet to receive a couple of key approvals prior to inviting the Commissioner of Metro Rail Safety (CMRS) for a safety audit of the Purple line’s 4.8 km underground section between Cubbon Park and Magadi Road.

BMRCL’s Managing Director Pradeep Khorala who interviewed with the Times of India last month had indicated these certificates would be “issued by the first week of March“, but recent reports have not indicated progress on this front. Granted that these are individually not big news items and are less likely to be written about in the mainstream media, but here’s something straight from BMRCL’s GM of Finance I’d like to share. On the night of March 8, he dodged a Metro enthusiast’s question and did not give a thumbs up to receiving the Speed Certificate upon which the SoD and ISA certifications are dependent:

@maddyvoldy will give you all the good news soon

Regarding the Fire Department’s clearance, the GM on March 5 announced:

However, as per another “senior official” who interviewed with The Hindu more recently on March 7:

We are awaiting fire safety clearance for the Sir M Visveswaraya Station. Clearances for all other stations are completed.

Either the left hand doesn’t know what the right hand is up to or key information was purposely being withheld like at it has previously been done at different times. What do you guys make of this? 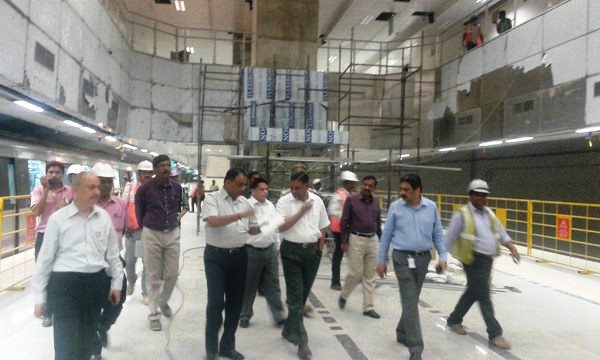 The above image gives a good idea about the finishing works inside the station which are nearing completion. For more interior images, check out the March 2016 newsletter.

Without obtaining these 4 certifications in their entirety, a March 2016 opening for the line can quite clearly be written off as I had indicated in February. Hopefully the next couple of days will bring some good news & clarity on when the Commissioner of Metro Rail Safety will be invited for one last inspection of the line. Like you, I’m eagerly waiting for the invitation to be sent.