Application to CMRS Submitted by BMRCL for Underground Inspection

The Bangalore Metro Rail Corporation Ltd. has finally submitted its application with all necessary paperwork to the Commissioner for Metro Rail Safety (CMRS) to visit and inspect Bangalore Metro’s MG Road – Magadi Road section! The CMRS’ visual inspection of the tracks & trains is mandatory, and the last step before commencing commercial operations for any metro system in India.

This news was confirmed by BMRCL’s General Manager of Finance in a tweet yesterday which has been embedded below:

The 4.8 km section between MG Road – Magadi Road runs primarily underground between the Cubbon Park and City Railway metro stations, and tunneling work for it under contract UG-2 was completed by the CEC-SOMA-CICI JV in March 2014. Trial runs on it started in November 2015. Recently, the BMRCL’s MD took K.J. George, Karnataka’s Minister for Bengaluru Development and Town Planning, and an entourage of media personnel on a tour of the underground stations. 10+ brilliant images from it can be seen here: [Pics] Bangalore Metro’s Underground Section Nearing Completion

The inspection of this section is now entirely dependent on the CMRS’ schedule. Once the invitation is accepted, the inspection’s duration can take anywhere from 3 days to a week after which it would take another week for the CMRS to send its report with approval (hopefully) and any suggestions on how to safely operate trains. After the approval comes through, the inauguration date would then depend on (1) how quickly BMRCL wraps up interior works, especially at Majestic (see recent images) and (2) the availability of ministers for attending the all-important inauguration function.

When this section opens up, Bangalore Metro’s network will expand from 25.5 km to 30.3 km, and more importantly bridge the gap between the elevated 6.7 km Reach 1 (Baiyappanahalli – MG Road) and the 6.4 km Reach 2 (Magadi Road – Mysore Road) where the BMRCL currently operates fragmented services: 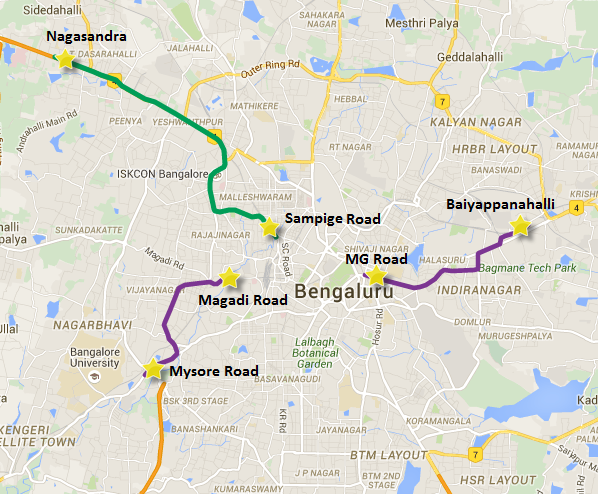 Tunneling work between Sampige Road – Majestic – Chickpet on the Green line is nearing completion by 3 TBMs. Please see my March 2016 tunneling update for data & some commentary on its progress.