The Delhi government has completed acquiring agricultural land for the Yellow Line’s 3rd maintenance depot in Badli! The 3 year deadlock between local farmers and the government was ended by providing a higher compensation rate of Rs. 3.07 crore/acre. Over this past weekend, the Chief Minister of Delhi announced that the compensation was disbursed last month:

As per a report in the TOI:

According to revenue department officials of North district, DMRC required around 60 acres of land for the construction of a yard at Badli. The earmarked expanse was mostly in Siraspur village though a part of it fell in Kheda Garhi village too. The acquisition process had been initiated in 2013 and had continued through 2014 when the villagers, expressing dissatisfaction with the compensation amount offered to them, began a protest in 2015. 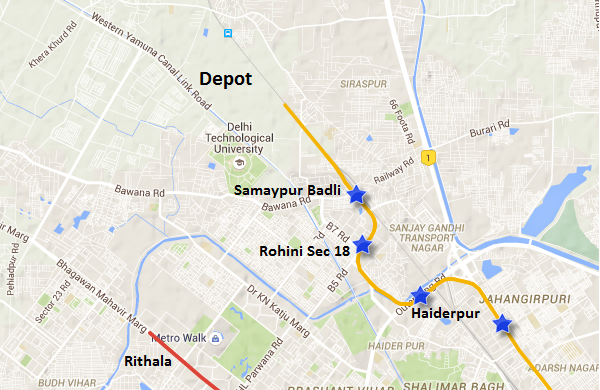 The existing 2 depots on this line are located at Khyber Pass in north Delhi and Sultanpur in south Delhi which were built during Phase 1 & 2 respectively.

The Delhi Metro Rail Corporation in 2013-14 had issued work orders for the depot’s construction including other related works, so I expect groundwork leading up to construction to begin within the coming weeks. Here are details of the 3 contracts which have been awarded to build it: