Hat tip to Raj B. Aklekar for sharing this news!

After NCC, Simplex & J Kumar were last week revealed on TMRG as the lowest bidders to build 3 packages of Mumbai Metro’s new 16.5 line from Andheri (East) to Dahisar (East), the Executive Committee of the Mumbai Metropolitan Region Development Authority (MMRDA) has now approved their appointments! Besides constructing the line’s elevated viaduct & 16 stations, the contractors would also be responsible for partly designing their sections by working together with the yet-to-be-appointed Detailed Design Consultant (DDC). 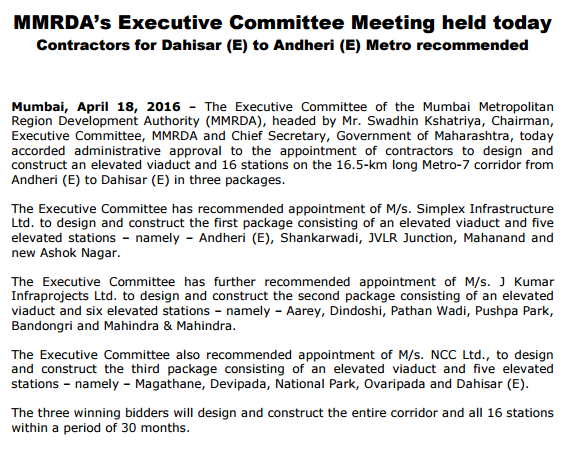 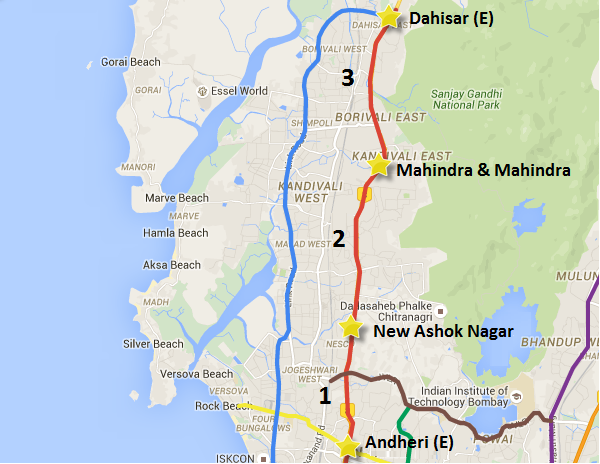 The line is estimated to cost Rs 6208 crores out of which the Asian Development Bank (ADB) is expected to provide a loan of about Rs. 2200 crores, representing roughly 36% of the total cost. In October 2015, PM Modi had laid this line’s foundation stone following which the MMRDA officially invited bids in December for its construction.

To recap from a previous post, this line’s depot thankfully doesn’t have any issues and will come up at the AAI’s Remote Receiving station in Dahisar along NH-8. Once the 3 work orders are issued, the 3 contractors will have 30 months (incl. the monsoon period as stipulated by the MMRDA) to build their respective sections. This would be Simplex Infra’s second metro related contract in Mumbai after they had previously won the bid & built the entire viaduct of the 11.4 km line 1 between Versova & Ghatkopar. Both J Kumar & NCC have ample experience and are currently building the first line of the neighboring Navi Mumbai’s metro from CBD Belapur to Pendhar.

As far as timing goes, I expect preparatory works for mapping en-route utilities and obtaining clearances for diverting traffic to begin in May – right before the monsoons begin their onslaught. Once the rains subside in August-September, piling rigs will be brought in to build the piers’ foundation to effectively kick-start the construction phase.