1st Alstom Train for Lucknow’s Metro to Arrive in October

A team from the Lucknow Metro Rail Corporation Ltd. just got back from France where it met officials from Alstom Transport SA to discuss and finalize the design of Lucknow Metro’s trains! While the final design has not yet been revealed, the MD of the LMRCL, Kumar Keshav, has announced that production will start in May at Alstom’s facility in Sri City, Andhra Pradesh, and the first of 20 trains will arrive in the city by the end of October.

After awarding Alstom the 80-coach rolling stock contract in September 2015, the LMRCL unveiled the trains’ preliminary design in February 2016, and a lot of its exterior design features are expected to be retained in the final design. This includes the color scheme, LMRCL’s Rumi Darwaza inspired logo and the lakhnavi chikankari pattern that can be seen on the sides in gold. Prior to leaving for France, a LMRCL spokesperson highlighted aspects of the design which were to be discussed:

LMRC needs to check every detail of the coach before giving a nod for manufacturing. This includes seats, handle bar, gates, CCTV cameras, grab-bars, poles, etc. Alstom will show them a 3D mock-up of Lucknow Metro coach.

While the final design is awaited, enjoy some renderings of the preliminary design: 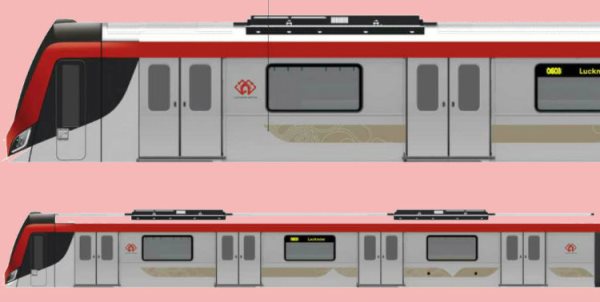 Despite the recent collapse of formwork (shuttering) onto the road below at Alambagh Metro station, trials on the 8.48 km Transport Nagar – Charbagh corridor are still expected to begin in December 2016 followed by commercial operations in early 2017.