Afcons Infrastructure has emerged as the lowest bidder to construct the viaduct of the 10.041 km Lokmanya Nagar – Jhansi Rani Square section of Nagpur Metro’s 18.557 km east-west line! The NMRCL had invited bids for this ‘Reach 3’ section in November 2015 and estimated it to cost Rs 200 crores. The scope of this package entails the construction of only the elevated viaduct (incl. within the 10 en-route stations), but not the stations which will be part of a separate contract or two.

I tweeted about this development after receiving wind of it on April 25:

..and received confirmation on April 26. The NMRCL is expected to make an announcement about this contract in the coming days after which preliminary ground work along the route can be expected to start in June.

Reach 3 includes 10 metro stations at Lokmanya Nagar (near the Depot), Bansi Nagar, Vasudev Nagar, Rachna Ring Road Junction, Subhash Nagar, Ambazari Lake View (Dharampeth College), LAD Chowk, Shankar Nagar, Institute of Engineers and Jhansi Rani Square. The line will intersect with the north-south line at Sitabuldi where the interchange station will be a part of a 25 storey building with other mixed use developments in its vicinity. 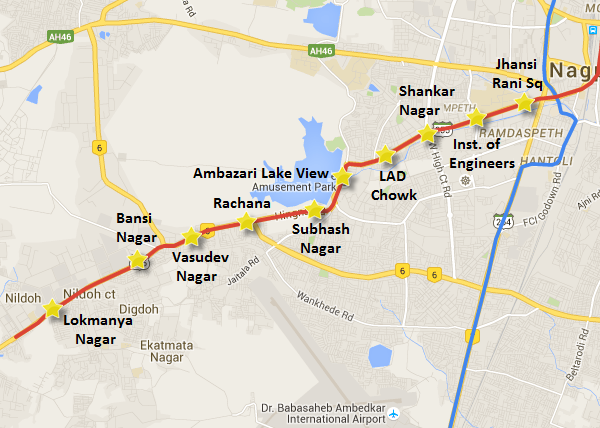 Recently, NCC Ltd. working on Reach 1 in south Nagpur cast its first pier for the north-south line. See details and images of that here: 1st Pier Cast for Nagpur’s Metro on Wardha Road.

Now I’m expecting the NMRCL to appoint General Consultants for the project in the coming weeks and open the financial bids for the construction of Reach 1’s 9 stations. Once the GC is appointed, the DMRC-RITES interim-consultant team will bid adieu to the city.