Hat tip to Deepak Chaudhary for bringing this to my attention.

The Ghaziabad Development Authority in its board meeting last month approved a proposal to extend Delhi Metro’s Blue Line from Vaishali station to Mohan Nagar! This roughly 5 km extension will be built entirely in Ghaziabad and will go on to form an interchange between the Blue and Red lines at the Mohan Nagar station which is currently being constructed as part of a 9.41 km extension of the Red Line from Dilshad Garden to New Bus Adda.

The GDA has now sent the extension’s proposal to the state government for its approval after which a detailed project report (DPR) will be prepared. Most likely this 5 km extension will be made a part of the Delhi Metro’s Phase 4 project which is currently in the design stage.

The alignment of the line is expected to be a straight shot on and along Madan Mohan Malviya Marg (Link Road). Details about the number of stations, their location and names have not been mentioned and will only be revealed when the DPR is created, but I expect 3 new stations (see purple stars below) to be built at Sector 16, Sector 10 and Sector 2 in Vasundhra along with a new station structure at Mohan Nagar. 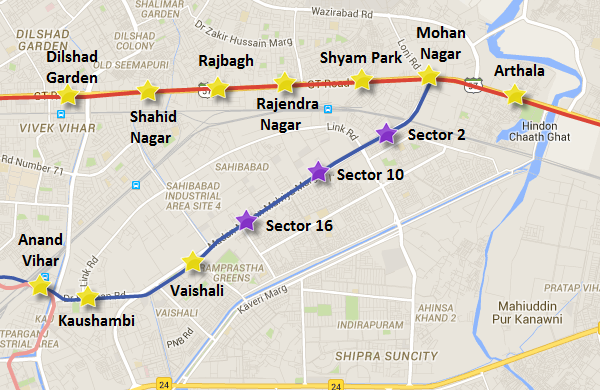