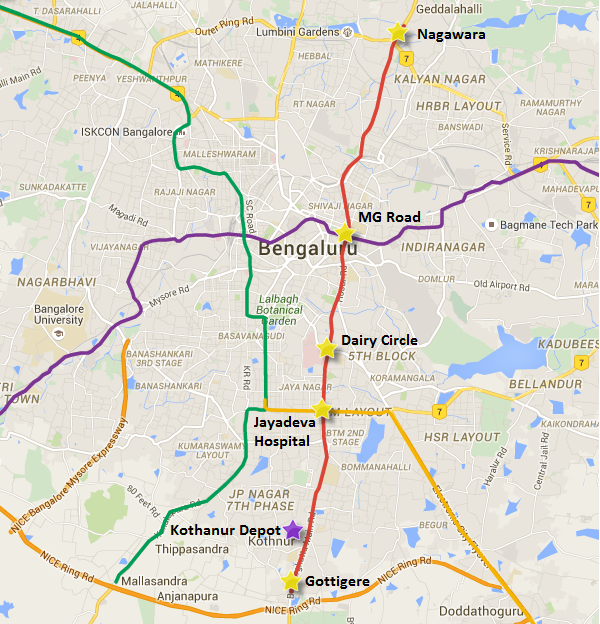 There are 3 major civil components of this line for which land acquisition of different degree / area is required: (1) a roughly 7 km elevated section from Gottigere to Swagath Road near Dairy Circle, (2) A roughly 14 km underground section from Dairy Circle to Nagawara, and (3) Kothanur Depot – a preliminary notification for acquiring land for it was approved and published in the Karnataka Gazette in November 2015. The depot is expected to come up west of Meenakshi Sundareswarar Temple and east of Kothnur Dinne village on the land parcel shown below:

The BMRCL invited demolition bids on this past Thursday (May 12) and plans to award the contract by June. The stipulated length of this little but crucial task is 9 months. Prior to its completion, the BMRCL will invite 2 contracts for the elevated section’s construction which I hope happens by the end of this year:

The BMRCL has taken an average of 10 months to award the 3 previous construction contracts (see list) for Phase 2, so if they were to invite tenders for the construction of these 2 packages by the end of this year, they are likely to only be awarded by Q3 2017 with ground work commencing in Q4 2017 or Q1 2018.

As per a new report in the Bangalore Mirror, the BMRCL has identified 221 properties measuring a total of over 71,000 sq meters for acquisition. These will be either partially or fully acquired for constructing 12 underground stations and their exit/entrances & ancillary support structures.

As per a BMRCL official:

We have already finalised lands required for the construction of 10 underground stations out of 12. We may require an additional 20 to 30 properties for constructing Langford Town and Vellara Junction underground stations. In a month’s time, a list of the properties identified will be sent to Karnataka Industrial Area Development Board (KIADB) for issuance of notification.

To minimize the costs involved in land acquisition since the land price is too high in the city, it was decided to limit the acquisition to one acre per station. However, there will be changes depending on location, traffic diversion and others. BMRCL will go for additional acquisition of land for construction of the stations, but these are yet to be finalized.

Both final notifications for land acquisition & tenders for their demolition are expected to be published by the end of this year after which it will take 9-12 months for the bidding stage for the following 3 packages to be carried out:

I expect contracts for these 3 packages to be awarded in early 2018 after which the first TBM will start tunneling works in 2019.