While contractors in the northern half of Kochi Metro’s 27 km metro line rush to complete work by mid-2017, the Delhi Metro Rail Corporation has just published notices inviting bids for 2 packages located in the southern half!

The first package (KC-17) includes incomplete sections of KC-04 and KC-05 which had to be re-tendered due to extremely slow work by Soma Enterprise and the Era-Ranken JV. In June, the DMRC curtailed Soma’s scope and tasked them with focusing on just the Kaloor-Maharaja’s College section. Back in 2014, the DMRC had offloaded the Ernakulum South – Vyttila section from the Era-Ranken JV and handed it over to Soma, but now they’ve invited fresh bids for that as well.

The 2nd part of this package includes the construction of the metro’s 1.92 km Tripunithura extension which was approved by Kerala’s state government in October 2014. Peg-marking for this new section’s route began in July 2015.

The 2nd package (KC-18) is also a part of the 1.92 km Tripunithura extension and includes the construction of a new 2 lane road bridge along with the metro viaduct over the Chambakkara Canal. 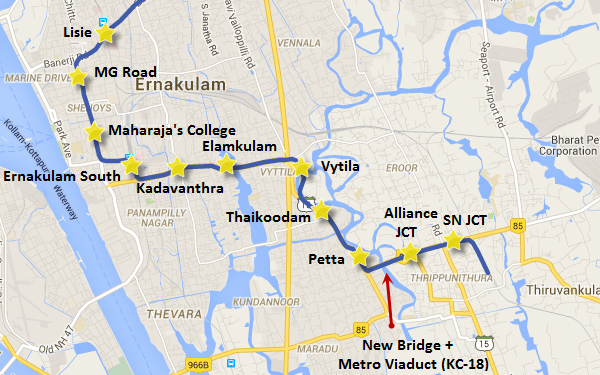 The last date for submitting bids for both packages is August 18. Once the contractors are assigned in Q4 2016, they will have 20 and 30 months respectively to complete all works. That said, any further extension of the metro line southward from the Maharaja’s College station can be expected to only open up in 2019/2020.