With the state elections over and a new government forming in Kerala, officials from the Delhi Metro Rail Corporation & Kochi Metro Rail Ltd. have finally opened up and admitted to the delay in implementing the 25.612 km Phase 1A  of the Kochi Metro project from Aluva to Pettah. The deadline for starting commercial operations has now been revised from November 2016 to April 2017, and even then, officials are aiming to only open a 13 km section between Aluva & Palarivottom with a possibility of including the 5 km Palarivottom-Maharaja’s College section which runs through the city’s center.

The delay in the project’s implementation is something I’ve highlighted multiple times in the past and should not come as a surprise for those who’ve kept a close tab on the Kochi section. Frustrated by delays in the Kaloor – Ernakulum South section, the DMRC recently curtailed the scope of Soma Enterprise’s job and tasked them with focusing on just the Kaloor to Maharaja’s College section. The rest of the KC-04 package from Maharaja’s College to Ernakulum South is planned to be re-tendered.

As per a Kochi Metro official who interviewed with The Hindu:

Some contractors are facing labour shortage, as metro rail work is under way in a dozen cities across the country. The onset of monsoon in Kerala has further hindered works like station construction, track-laying, traction, signalling, and telecommunication. The commissioning of Phase-I will thus be extended up to March, provided the Commissioner for Railway Safety gives the green signal 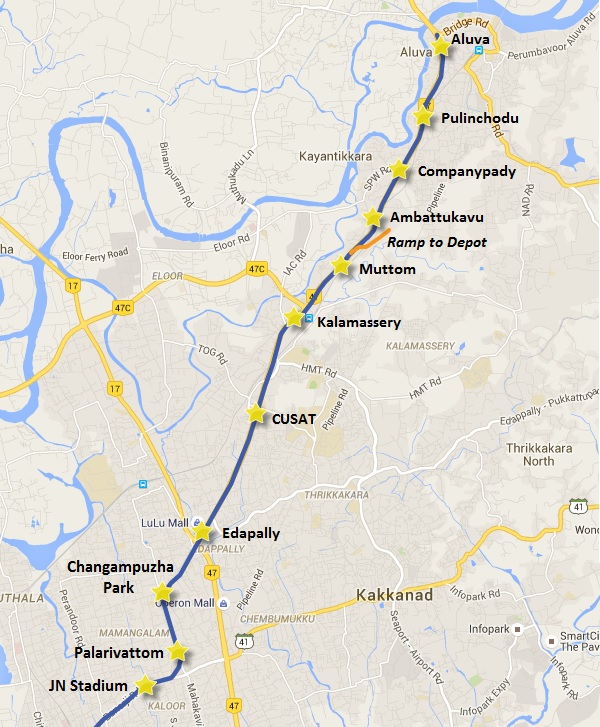 Besides construction delays, it appears that Alstom India, the rolling stock supplier for 25 train-sets to the project, is struggling with manufacturing & supplying trains. Pressure to deliver trains to Lucknow’s Metro project must have made them hit their production capacity constraint. The 1st of 25 Metropolis trains for Kochi arrived in January and the next one is expected to arrive on July 8. KMRL officials have indicated that they would only need 9 trains for running operations on the Aluva – Maharaja’s College section and the rest 8 will be delivered by September. However, as per Alstom India’s MD, only four trains are currently on their Sri City facility’s production line.