Last month, I wrote about 2 TBMs which have been refurbished in Delhi and are ready for delivery to the Tata – Gulermak JV for constructing 1,812m twin tunnels on Lucknow Metro’s 3.44 km package LKCC-06 between Charbagh and KD Singh Babu Stadium. Now the TBM manufacturer, Terratec, has published a press release on that development including some interesting details on the tunneling drives. Relevant excerpts:

The first of the two TERRATEC machines is due to be delivered to the Sachivalaya (State Secretariat) station site in mid-November, with the second TBM expected to arrive on site in early December. The machines will initially be launched on twin 780m drives towards Hazratganj, where they will bore through local geology consisting of stiff to hard clayey silt and medium to dense silty sand, with an average overburden of 4m to 10m. 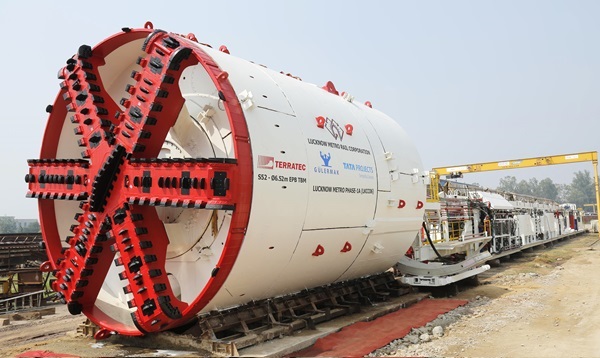 Following the initial drives to Hazratganj – where the machines will pass beneath historic buildings in the Capital Plaza of Hazrat Ganj – the machines will return to the shaft at Sachivalaya and be deployed on their next, 613m-long, drives towards Hussainganj. From there, they will continue on a further 419m – crossing underneath the Haide Nalah (canal) – to the cut and cover ramp near Charbagh station.

So a total of 6 tunneling drives and an equal number of TBM breakthroughs will be recorded by the Tata-Gulermak JV team & covered by me here on the site:

As you can see, that means the small Hazratganj – KDSB Ramp section, in the northern part of the package, will be constructed using the cut and cover method.