IL&FS Transportation Networks has announced that their IL&FS – PJSC Kyivmetrobud JV has emerged as the lowest bidder for constructing Chennai Metro’s UAA-09 package which involves the construction of two underground stations at Sir Thiyagaraya College & Korukkupet on Chennai Metro’s 9 km extension from Washermenpet to Wimco Nagar.

This northern extension of the 23.10 km  Chennai Airport – Washermenpet line was approved by the Ministry of Urban Development in December 2015 and Afcons Infrastructure has already started work under contract UAA-08 for building its 2.4 km tunnels & station diaphragm walls. 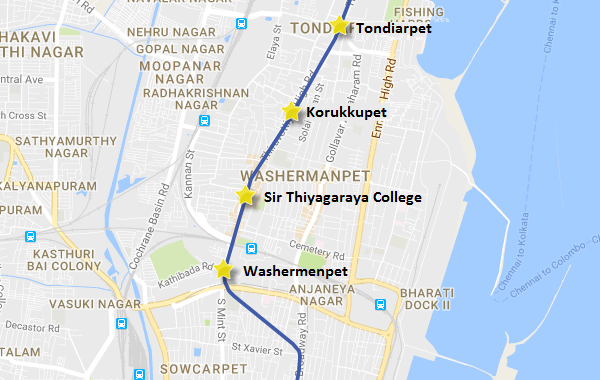 Chennai Metro Rail Ltd. had invited bids for this package in August 2016 and estimated it to cost Rs. 385 crores. The IL&FS – PJSC Kyivmetrobud JV then submitted a bid of Rs. 371.218 crores to secure L-1 position. If no issues arise, then they’ll go on to be awarded the contract in the next couple of weeks. Once Afcons Infrastructure completes building the station boxes at Sir Thiyagaraya College & Korukkupet, then they’ll hand over the sites to the IL&FS – PJSC Kyivmetrobud JV for constructing the stations’ structures and all other allied infrastructure.