The Robbins Company confirmed today in a tweet the delivery of a Crossover Tunnel Boring Machine to construct a portion of Mumbai Metro’s 33.5 km Line-3 project. This hybrid TBM series, launched in 2015, has been designed with characteristics of Single Shield Hard Rock machines and Earth-Pressure Balance Shields (EPBS) for efficient excavation in mixed soils with rock, and thus appropriately has been named as XRE – Crossover (X) between Rock (R) and EPB (E). In the past, Robbins has supplied  XRE TBMs to build the Grosvenor Decline Tunnels in Moranbah, Australia and to build a complex wastewater scheme in Mexico City, Mexico.

Although the recepient contractor has not been specified by Robbins, one of my sources has confirmed that Larsen & Toubro will be taking delivery of it and will either deploy it along with STEC TBMs on package UGC-01 between Cuffe Parade – Chhatrapati Shivaji Terminus or on package UGC-07 between Marol Naka – SEEPZ – both of which were awarded to the L&T-STEC JV in July 2016.

Excited to announce we will be supplying a Crossover TBM for Mumbai Metro! Learn more by visiting us at #BCIndia2016 https://t.co/XLBsDpHe4n pic.twitter.com/SKurZ5CT5B 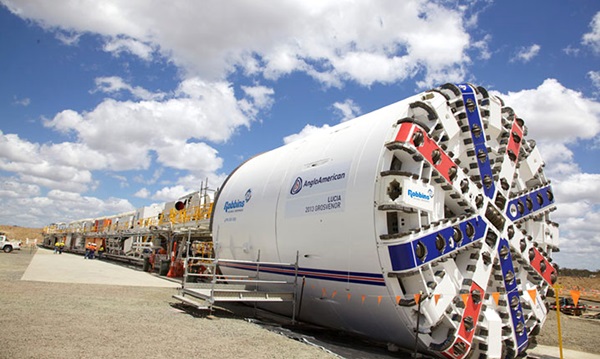 L&T began finalizing their TBMs right after they emerged as the lowest bidder for packages UGC-01 & UGC-07 in October 2015. Soon after, Robbins’ Vice President Doug Harding explained and justified the use of their new Crossover TBM for Mumbai in a journal published in January 2016:

Robbins Crossover TBMs
Given the mixed ground expected at the Mumbai Metro, Crossover TBMs are the optimal choice for Line 3. Crossover TBMs feature aspects of two TBM types, and are ideal for mixed ground conditions that might otherwise require multiple tunneling machines. The XRE, standing for Crossover (X) between Rock (R) and EPB (E), is the most common type of hybrid machine. The XRE features characteristics of Single Shield Hard Rock machines and EPBs for efficient excavation in mixed soils with rock. Additional types of Crossover machines include the XSE (Crossover between Slurry/EPB) and the XRS (Crossover between Rock/Slurry) TBMs.

The XRE TBM is the most likely choice for the mix of rock and soft ground found at the proposed Mumbai Metro site. The XRE TBM is designed for operation in open or closed mode, and can be fitted with a belt conveyor and/ or screw conveyor for muck removal. The method of muck removal can be customized depending on the diameter of the machine and the ratio of rock to soft ground in the tunnel. A specialized cutterhead with interchangeable cutting tools is included on the machine, allowing the contractor to change out cutting tools depending on the ground conditions. When difficult ground such as fault zones and pockets of soft ground are encountered, the TBM can engage two-speed gearboxes to excavate at high torque and low RPM. This method effectively allows the XRE TBM to bore like an EPB, and get through tough conditions without becoming stuck. In hard rock the TBM can excavate in hard rock mode using low torque and high RPM for greater efficiency.

An XRE TBM for the Mumbai Metro can be fitted with a short, center-mounted screw conveyor for greater efficiency during muck pickup. The center-mounted screw also requires lower cutterhead torque than a bottom screw situated in the bottom of the bulkhead, and receives less wear. Such a machine would be able to tackle hard rock, squeezing ground, and soft material with water pressures up to 7 bar. By using such a machine downtime would be lessened and advance rates maximized, giving the contractor the best chance to maintain the project schedule.

Conclusions
Crossover TBMs, meant to “cross over” between widely varying types of geology, are the best solution for the mix of hard rock and soft ground in Mumbai. Crossover TBMs have been used on projects worldwide, where their performance has kept very complex projects on schedule and on budget. It is the authors’ belief that Crossover TBMs are the key to keeping Mumbai Metro on schedule, and to maintain safe and efficient excavation throughout the tunnel length.

From what I’ve gathered, so far 4 out of 5 contractors for this line have finalized their TBM deals and in the coming months will be releasing further details on them after factory acceptance tests. As per my estimate, Mumbai will see anywhere from 14 to 20 TBMs being deployed. As and when details are announced I’ll make sure to cover them, so do keep an eye on the Mumbai section!