A day after inviting bids for Bangalore’s Bommasandra-Hosa Road (Reach 5) stretch, the Bangalore Metro Rail Corporation on December 10 invited construction bids for another section of the 72 km Phase 2 project’s new 18.80 km RV Road – Bommasandra elevated line. This time around, they invited infrastructure companies to submit bids for the 6.385 km mid-section of the line between Hosa Road and HSR Layout which’ll consist of 6 stations on Hosur Road.

Interestingly this section has also been named ‘Reach 5’ instead of Reach 5A/5B as they’ve traditionally done to differentiate between adjacent civil packages. Like the Hosa Road – Bommasandra stretch, the contractor here will also be required to complete all civil works in 27 months. 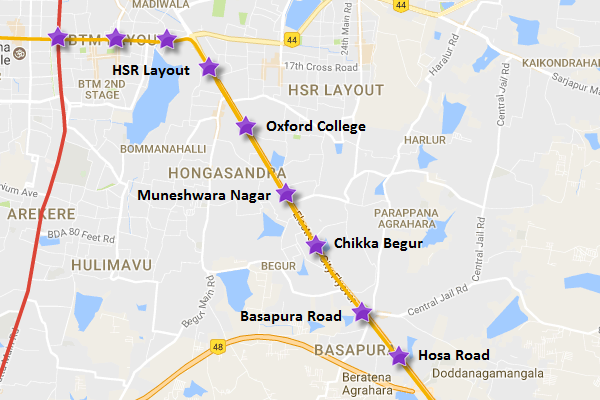 Tender documents will go on sale on December 24, 2016 and the BMRCL has estimated this section to cost Rs. 492.38 crores. The last date for submitting bidding documents is 3 pm on March 6, 2017 after which the bids will be opened & evaluated for eligibility at 3:30 pm.

BMRCL’s CPRO recently mentioned that construction “work should commence in about 3 months”. Well, that just won’t be possible. The tendering process for civil contracts in India have multiple layers and each bidder’s eligibility is first evaluated, then their technical bid and finally their financial bid. Each step of the process is closely monitored by the lending agency (in this case KfW), and bids are opened & awarded only with their consent with the evaluation process usually taking an average of 6 months. Here’s the BMRCL’s track record for Phase 2:

And that’s just the tendering stage. After the contract is awarded, the contractor would be need another 2-3 months just to mobilize resources and hire engineers. To see these timelines in action, simply visit the Lucknow or Mumbai sections where new contracts have been awarded over the past 6 months.

Like the other packages, I expect the contract for the Hosa Road – HSR Layout section to also be awarded only in Q3 2017 with construction work beginning shortly after in Q4 2017 subject to approvals. Timing wise, I expect this section to open no sooner than 2021. If the BMRCL chooses to start operations on it along with the northern portion of the line (RV Road – Silk Board), then I expect it to open only by 2023.