Yesterday, a high-power committee of the Gujarat Government finalized two routes for Surat Metro’s Phase 1 project with a combined length of 40.76 km and 37 stations. This is the second metro rail project in the state after Ahmedabad, where construction for its Phase 1 project has been underway since 2015. Surat’s metro project is estimated to cost Rs. 12,800 crores and a small 7.50 km portion, through the heart of the city, will run underground while the rest will be elevated. Both lines will meet near Majura Gate and a new bridge will be built over the Tapi River to connect Adajan and Athwalines.

The two routes were suggested by the Delhi Metro Rail Corporation (DMRC) who were appointed to prepare the project’s Detailed Project Report (DPR) in March 2016. After surveying over 15,000 people, observing traffic patterns and taking the feedback of the Surat Urban Development Authority, they narrowed down to 2 routes. In July 2016, they began geotechnical soil investigation work and then submitted a draft DPR to the Gujarat government in November 2016.

Note: official line colors or numbers have not been finalized. A list of stations has not been released either. 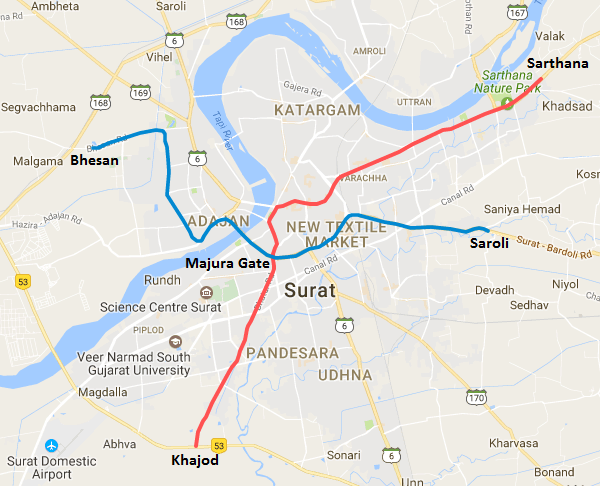 The project’s final DPR is expected to get ready by March 2017 after which it will be submitted to the state government for its cabinet’s approval. Just last month, JICA showed interest in financing a part of the project and they’ll take a final call after evaluating the DPR.