The Delhi Metro’s much needed 4th fare revision will go live this Wednesday (May 10) after the Delhi Metro Rail Corporation’s board approved a fare hike recommended by a 3-member fare fixation committee (FFC) set up under the Delhi Metro Rail (Operation & Maintenance) Act, 2002. Fares or ticket prices were last revised in 2009, and since then, both its network and ridership have more than doubled from 9 lakh to 27 lakh (daily ridership) and from 90 km to 213 km (network) while operating expenses have substantially gone up. 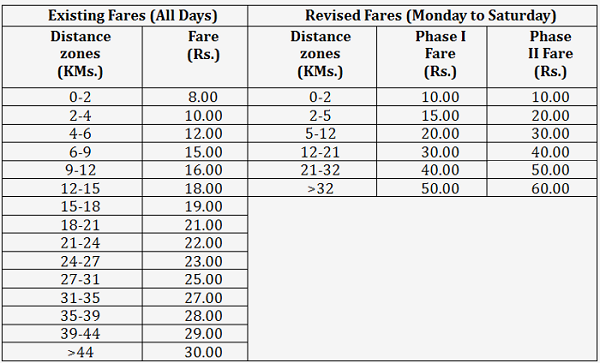 According to the DMRC, the above rounded figures would also help in eliminating the shortage of coins and assist in dispensing change to commuters.

With a view to encourage ridership on Sundays and national holidays (26th January, 15th August and 2nd October), the following special discounted fares were approved: 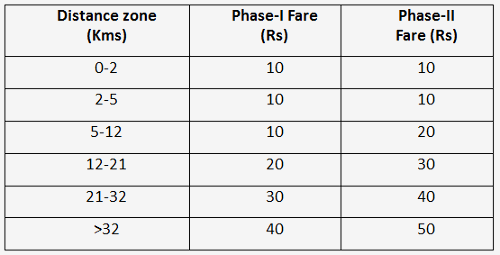 The DMRC will continue to provide 10% discounts on fares for smart card users who exit the system during off peak hours. Fares on the Airport Express Line will remain unchanged, and special tourist cards of 1-day and 3-day validity for Rs.200 and Rs.500 will also be available.

To give a little background, the DMRC had been demanding a fare hike for a long time, citing increasing operational costs (electricity, labor, maintenance expenses) that it was unable to recover from traditional fare collection and other sources of revenue such as advertisements. They had been incurring an overall net loss over the past couple of years (see DMRC’s annual reports), and its MD had written to the Ministry of Urban Development (MoUD) multiple times to marginally increase fares to improve the organization’s health in order to continue safe operations and provide regular maintenance to the system.

As per the DMRC, this fare revision was necessary in light of:

In May 2016, the MoUD finally set up a fare fixation committee to look into the DMRC’s proposal. Although their suggestions were received in early 2017, both the Central and Delhi governments were not in favor of implementing the revision due to the municipal polls which just concluded in April.

While this fare revision might not be good news for users, they must take it in a positive manner as it will provide a necessary boost to the organization’s health so that it can continue providing self-sustaining regular services with proper maintenance, all of which makes the system so great.