That was extremely quick!

Maha Metro invited bids for this package, P1C-02, located on the 14.665 km Vanaz – Ramwadi east-west line on April 7 2017, and estimated its construction to cost Rs 300 crores. Here are the financial bid values submitted by 3 of the lowest, technically qualified, bidders:

The project’s alignment was recently revised in central Pune – see the new official map here. In the coming months, MahaMetro will invite separate bids for the construction of 7 stations on this section which will be located at Vanaz, Anand Nagar, Ideal Colony, Nal Stop, Garware College, Deccan Gymkhana, Sambhaji Park: 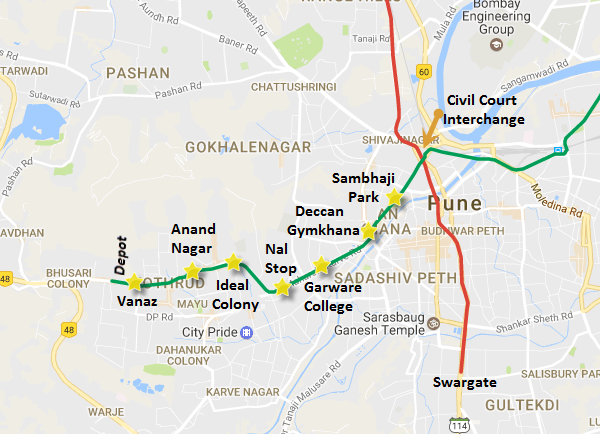 If no issues arise, then Simplex will go on to be awarded with the project’s 2 major civil contract – see list of contractors.

With this development, preliminary utility shifting and barricading works along the line’s route can be expected to start in July-August.

Meanwhile, NCC has started barricading works for the 10.795 km Reach-1 (PCMC – Range Hills) section, shown above in orange, at Nashik Phata. Here’s a tweet with images: