The Delhi Metro Rail Corporation last week invited bids to extend its 22.9 km Airport Express Line further south by 1.878 km from Dwarka’s Sector 21 Station to the upcoming Exhibition-cum-Convention Centre (ECC) in Dwarka’s Sector 25. This extension has been included in Phase 3 and will be funded primarily by the Japan International Cooperation Agency (JICA) which is financing the Delhi Mumbai Industrial Corridor.

The line’s alignment hasn’t been revealed by the DMRC or DMICDC but will most likely look like this with a provision to be extended to Gurgaon in the future: 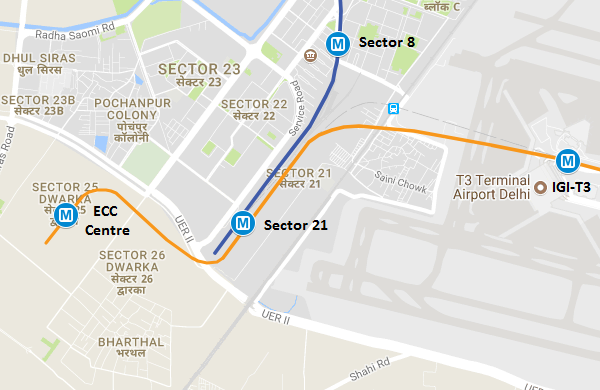 DMRC has estimated CC-127 with twin box tunnels & one station called ‘ECC Centre’ to cost Rs 310 crores, and would like work to be completed within 30 months of the Letter of Award (LoA). The last date for submitting tender documents for bidding is August 8 2017 (12 pm) after which the bids are planned to be opened & evaluated for eligibility on August 16 at 12 pm. I expect financial bids to be opened in Q4 2017 with construction work starting in early 2018.

To give a little background – the new ECC, with an overall built-up space of 1.02 mn sq. meters, is being built under the Delhi Mumbai Industrial Corridor project and is envisioned as a “world class” transit oriented mixed use district providing one of the largest facility of its kind in India. Its master plan was approved by the central government in December 2016 and consists of space for exhibition halls, convention centers, banquet halls, an arena, a financial centre, hotels, food & beverage (F&B) outlets, commercial and retail services and common internal infrastructure facilities.

The project’s Environmental Impact Assessment report was prepared by AECOM and includes the following master plan layout. The underground metro station is planned to come up right below where #11 marked in the middle of the land parcel –