The Bangalore Metro Rail Corporation Ltd (BMRCL) has finally their released October 2015 newsletter which can be accessed here.

While interior work inside the underground stations is progressing towards completion on the east-west line, track-work is surprisingly not yet complete or progressed since September! The newsletter indicates “Eastbound track work of 4856 Track Meters is completed out of 4892 Track Meters”. That being said, you really have to wonder on what basis did The Hindu yesterday publish the following: East-west metro connectivity could be a New Year’s gift ? It was already known that BMRCL’s MD, Pradeep Singh Kharola, loves taking people for a ride (horrible pun not intended), but now The Hindu has also started doing the same. Just take a look at the Vidhana Soudha station’s progress below: 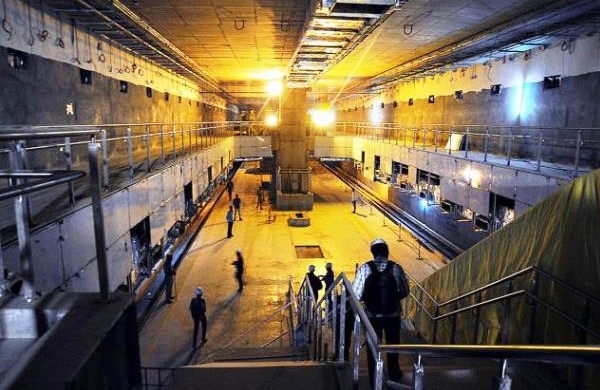 On the north-south Green line’s tunnels, TBM Godavari & TBM Margarita have made absolutely poor progress. Even though the BMRCL had claimed that TBM Krishna would restart tunneling from Chickpet to Majestic in 45 days from its breakthrough at Chickpet on August 31, tunneling work is yet to start. The only good news comes from TBM Kaveri which completed tunneling a distance of 124 meters in a month!

Here’s a map to just show the general launching point & direction of the final tunneling drives. It does not represent the actual distance covered by the TBMs.

• Green Arrow – The Godavari TBM had a new cutterhead installed on it in late July and restarted tunneling towards Majestic in mid September. At that time, it had only covered 352 meters of its 973 meter long journey. Now as per the October newsletter, it has completed only 380 meters which is poor.
Distance left – 593 meters

• Maroon Arrow – The Margarita TBM started tunneling from the Majestic station towards the north ramp in October 2014. As per the September newsletter, it had covered 804 meters out of its 973 meter long journey. Now according to the October newsletter, it has completed 817.50 meters which is again rather abysmal.
Distance left – 155.5 meters

• Orange Arrow – The Krishna TBM made a breakthrough at Chickpet station on August 31 from the KR (City) Market station (See: [Pics] TBM Krishna Finally Makes a Breakthrough at Chickpet) after a slow and tiring journey of 22 months. It was supposed to have gone through repairs/maintenance and put back in action for one last journey in 45 days, but at the time of writing this update, it hasn’t yet commenced tunneling.
Distance Left – 747 meters