So, remember the new 10.92 km Okhla Bird Sanctuary – Sector 142 metro line that was approved in September 2015? The Noida Authority board meeting has approved a proposal to amend the project’s DPR and reroute it. Instead of it running along the Noida Expressway and terminating at the Magenta line’s Okhla Bird Sanctuary station, the line will now run through other parts of the city and terminate at the Botanical Garden station which currently serves the Delhi Metro’s Blue line and will serve the Magenta line in 2017.

As per earlier plan, the 11-km link was supposed to run parallel to the Noida Expressway. But we now want it to take a different route as to be able to provide metro connectivity to more residential as well as commercial areas. Once ready, this link will also benefit commuters in travelling to south and east Delhi 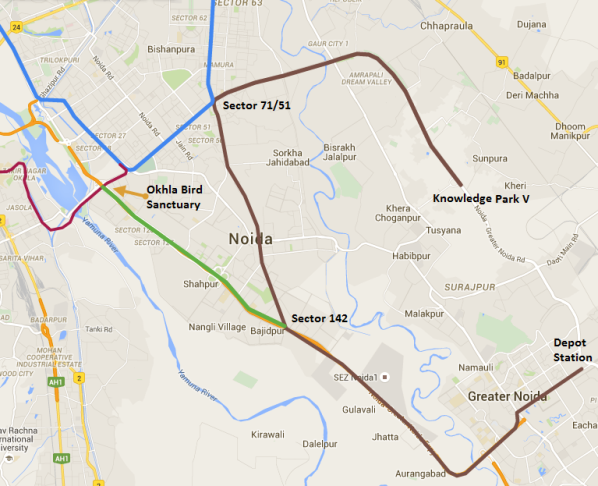 The new alignment of the line is yet to be determined. Here’s how it could be possibly look like keeping in mind that it is not planned to run along the expressway which is unavoidable for most part. I also believe they wouldn’t want it to get too close to the catchment areas of the under construction Sector 71-Sector 142 section of the Noida – Greater Noida metro line. 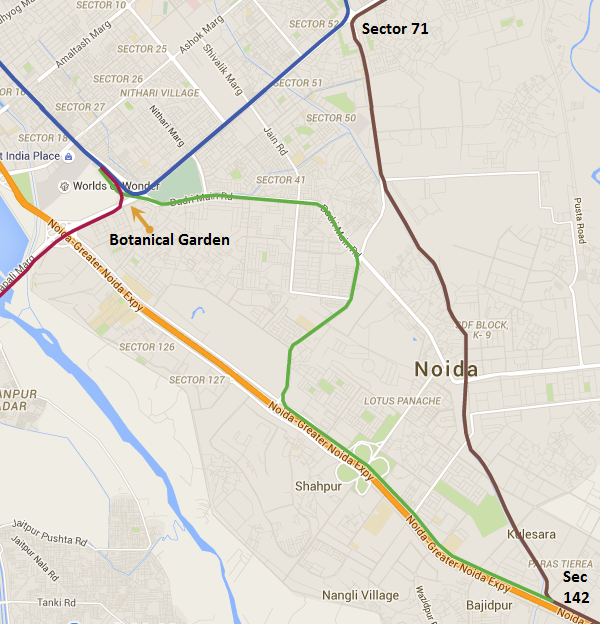 Does the route marked above make sense? How else could it be aligned to serve more areas and bring in more users?

Amending the project’s DPR will now take 4-6 months after which it will be placed for the state government’s approval. Overall, I expect this project to only take off once the 30 km Noida – Greater Noida line (see latest images) is operational by November 2017. The Noida Metro Rail Corporation just doesn’t have the appetite or the required funds from local and state sources to kick-start this project this year.