An alternate site proposed by the West Bengal government’s Transport Department has been zeroed in as the location of the Mominpore (mominpur) station of Kolkata’s 15.75 km Joka – Esplanade line! This is after the Ministry of Defence had consistently refused over the past 5 years to allow the elevated station to come up adjacent to the Army’s Command Hospital that serves the Eastern Command.

As this station was was projected to be the busiest along the route, the Rail Vikash Nigam Limited (RVNL) refused to skip constructing it as the distance between the adjacent stations of Majerhat & Kidderpore would have been 2.7 km which is not ideal for metro systems in urban centers. 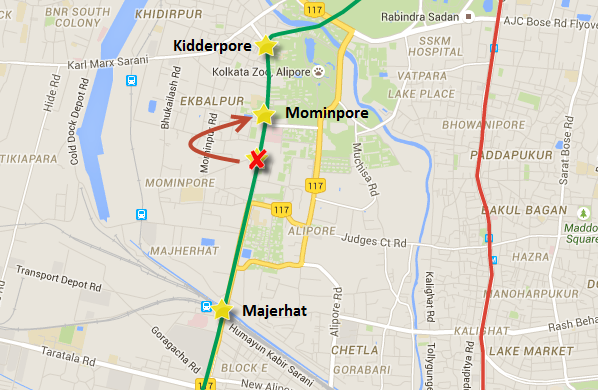 As per a Kolkata Metro Railway official:

Mominpore station had become a serious issue and one of the biggest hurdles of the project. Skipping the station wasn’t an option. A lot of passengers would have been deprived of a faster mode transport. If the Army had given us the land, Army personnel would have been the biggest beneficiaries along with residents of Mominpore. Now, if we get the land from police, it’s police who will benefit.

New Location – at the Alipore Bodygaurd Lines (B.G.L) where the Kolkata Police’s Headquarters are located.

The new location is not the most ideal or centrally located between the adjacent stations, but it does help the RVNL in taking steps to start the detailed design process for the elevated section between Majerhat & Kidderpore and the underground section between Kidderpore and Esplanade which will become a massive 3-line interchange station.

With this issue out of the way, the RVNL has crossed a series of tiring hurdles that have delayed the line since 2011. Besides Mominpore, the other ones are:

The line is entirely financed by the Indian Railways with some assistance from the state government and has no foreign loans to repay. With this issue resolved, major pending issues now include the Victoria Memorial station’s location, TBM shaft’s location in Maidan and a railway block which would be required for the line to cross over the Indian Railways’ line at Majerhat.

The earliest the 7.5 km Joka – Majerhat elevated section could possibly open up is 2019, but the primarily underground 8.25 km Majerhat – Esplanade section where bulk of the current pending issues lie would only open up after 2022.