There isn’t always uplifting news to share about Kolkata’s Metro system, but this isn’t one of those times!

Officials from the Metro Railway Kolkata and the Kolkata Metro Rail Corporation have hired RITES to design a massive new interchange beneath Curzon Park at Esplanade! This new interchange structure would house the platforms for the upcoming Line 2 (Salt Lake Sector V – Howrah Maidan) and Line 3 (Joka – Eplanade). The existing Line 1’s Esplanade station, built underneath Jawaharlal Nehru Road, would be connected to this structure via a subway.

As per a senior transport officer who interviewed with the ToI:

Unless Metro alignments are physically integrated, the seamless interface would not be possible. So there would be an integrated terminal structure, which will be in sync with the structural ethos of Esplanade. Howrah station complex, for instance, remains an architectural marvel for more than 100 years. We are also planning similar architectural designs for the Esplanade terminal. 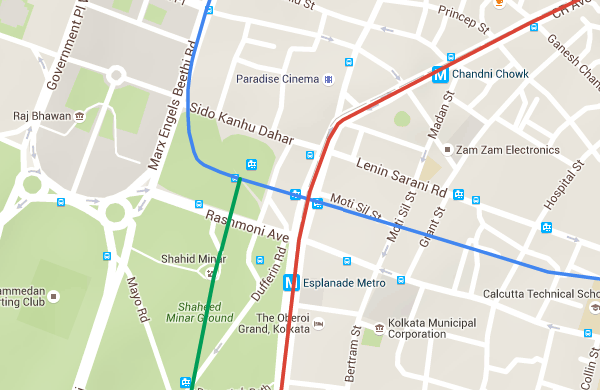 After the state government’s approval, many positive meetings to discuss the station’s blueprint have taken place between different stakeholders. While RITES will conduct a route rationalization study, design the overall layout and connectivity to surrounding structures (eg. High Court & Eden Gardens), there are plans to hire Delhi-based School of Planning and Architecture to come up with the building’s architectural design to make it naturally fit into its colonial surroundings.

I expect the construction of this interchange to only begin in 2017 after which it would take at least 4 years to complete. However, it might take another couple more years for Line 3’s trains to start operations as the Ministry of Defence has not yet approved the designs of the important Mominpur station due to the Command Hospital located in the area. Back in January, they finally gave their approval to construct underneath the Maidan and Turf View, a residential complex for Defence personnel but work will only begin once the Mominpur issue is sorted.

When built & operational, Esplanade will become India’s second 3-line interchange after Delhi’s Kashmere Gate station where the Violet line is expected to open and join the Red & Yellow lines by September this year. Another interchange at Noida’s Botanical Garden station has been planned by the Noida Authority, but is not likely to be approved anytime soon.