The Bangalore Metro Rail Corporation Ltd (BMRCL) just published their May 2016 newsletter which can be viewed here! This time around, they’ve made it a lot more comprehensive by including progress on Phase 2’s land acquisition, building demolition & utility shifting works etc.

The month of April was very significant for Bangalore as TBM Godavari made a breakthrough at Majestic station after 35 months, and more importantly, the 4.8 km underground section of the Purple Line began commercial operations. As always, let’s first take a look at some new snaps of the underground sections, and then dive into analyzing the data:

The tunneling data in the newsletter was recorded at the start of the month and as such does not reflect recent progress made in the first 10 days of this month. However, since data from the April newsletter is available, a valid comparison can be made to see the progress made over the past month (April) with the month before (March).

Purple line –  Tunneling on the Purple line’s 4.8 km underground section between Magadi Road and MG Road was completed in March 2014 and trials started in November 2015. The line was finally inaugurated on April 29 and commercial operations started the next day at 6 am. A comprehensive history of the underground section from bidding to construction to testing can be viewed here: History of Bangalore Metro’s MG Road – Magadi Road Section.

Green line – The Green line’s tunnels from the North Ramp to the South Ramp are being constructed by a JV of Coastal & TTS with some help from CEC-CICI for 1 tunnel & associated cross-passages north of Majestic station. Only 2 more tunnels are now left to be completed between Chickpet & Majestic. Here’s a map displaying the incomplete Green line’s underground section between Majestic & Chickpet on which 2 TBMs are currently operating: 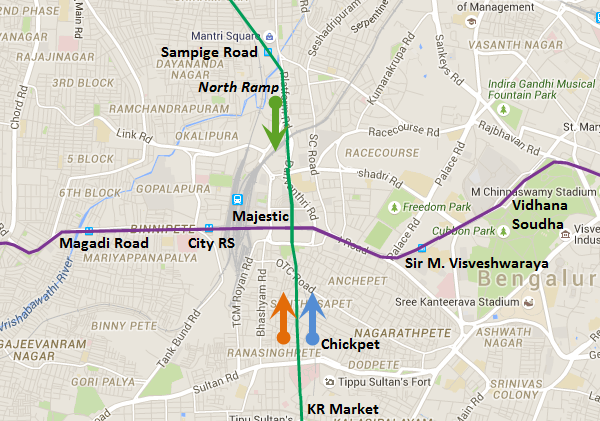 • The Krishna TBM made a breakthrough at Chickpet station on August 31 from the KR (City) Market station after a slow and tiring journey of 22 months. After being put through repairs for 112 days, the TBM was launched on December 22 towards Majestic for one final drive. In the month of April, it showed signs of slowing down (similar to Kaveri) and excavated 87 meters which is still brilliant.
Distance Left –  243 meters

• The Kaveri TBM was launched from the Chickpet station in February 2015 and has covered only 26 meters since the April 2016 update. The reason for this includes hard rock and the precarious nature of buildings en-route to Majestic, many of which had to be evacuated.
Distance left –  103 meters

• The Godavari TBM finally made a breakthrough at Majestic station on April 19 (view details & images). Next month’s update will not contain details on it.

The distance between the 2 stations is only 1.5 km, and both twin tunnels between the North Ramp & Majestic have been completed by TBM Margarita and TBM Godavari. The BMRCL & its CPRO have made multiple announcements that track-work within both tunnels is in progress, but the newsletter and engineers on-site do not agree with this claim. As I mentioned in the previous update, if the BMRCL were to start trial runs by August/September 2016, then there’s a small possibility of the Green line getting connected to the Purple line at Majestic station by the end of this year. Otherwise, we’ll have to wait until Q1 2017.

TBM Krishna continued advancing at a nice rate aided by new cutting discs and evacuation of many fragile buildings along its route for TBM Kaveri which is still limping, but expected to make a breakthrough at Majestic’s southern shaft in June. TBM Krishna still has another 243 meters to go which I expect would be wrapped up by August-September. After taking into account the time it takes to lay the track bed, install tracks, electrical, signalling and telecommunication equipment, I expect trial runs to begin in Q1 2017 and commercial operations to start in mid 2017. Does anyone else share this assessment?