As per a recent report, work to assemble a pre-fabricated steel truss bridge for Hyderabad Metro’s viaduct over the existing Oliphant railway bridge near the Secunderabad railway station is all set to begin in July! This news comes after the officials from the South Central Railway finally agreed to Hyderabad Metro Rail Ltd.’s long pending request to temporary lease an acre of its land to assemble the bridge which has been fabricated at a subcontractor’s facility in Noida and will soon be on its way to the city.

The metro’s truss bridge will weigh about 1100 tonnes and go over the 185 year old railway bridge named after James Oliphant who served as a Superintendent Engineer in Hyderabad in the 1820’s. Excerpt from The Hindu:

The (steel) bridge was made with high precision and high strength steel plates joined by ‘friction grip bolts’ to withstand the different types of pressures exerted on the large span crossing over the railway bridge. It’s because the main obligatory has been designed for a length of 275 ft without any support and with a height of 60 ft or six floors high from road level as the railway authorities conditioned that no pier or pillar can be allowed in between the railway tracks. They also wanted a minimum of 28 ft height be maintained above the Oliphant Bridge tracks for accommodating future double-decker trains. 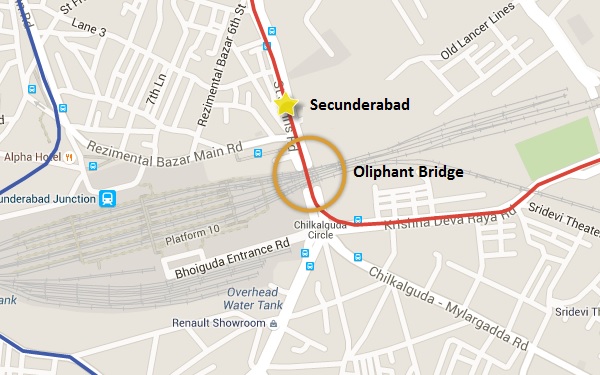 Here’s an extremely crude impression of how the bridge will look like. Note that it will be erected perpendicular to the railway tracks and not as depicted. 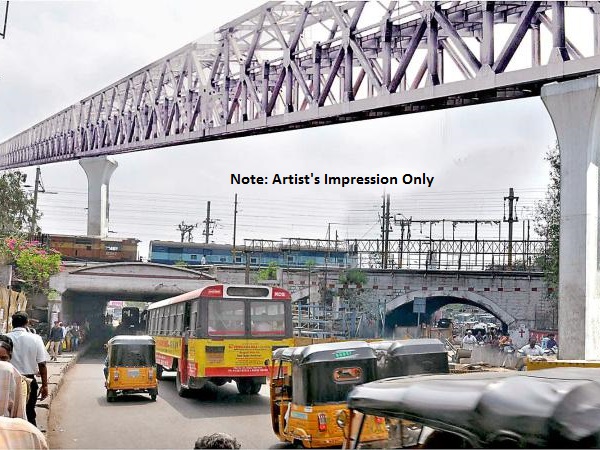 Artist’s impression of the Metro’s steel bridge over the Oliphant Bridge – Source: The Hindu

Out of 8 railway crossings by the metro’s 3 lines in the 72 km Phase 1 project, this is the toughest one of the lot as the line will make a sharp turn with a curvature radius of 128 meters. The bridge’s on-site assembly will take about 5 months with the help of a trestle support structure after which it is expected to be slowly pushed into its final resting position in January 2017 similar to the new Shakurpur & Punjabi Bagh bridges for the Pink Line in Delhi. Click on the links below to view more details and images on each: