A month after the Commissioner for Metro Rail Safety and his team held a 2 day inspection of Hyderabad Metro’s 12 km Miyapur – SR Nagar stretch, L&T Metro Rail – the concessionaire of the project, has received approval to start commercial operations on this stretch. This news was revealed during a presentation made by HMR’s Managing Director, N.V.S. Reddy, to the Committee of Public Undertakings of the Telangana Legislature.

This section is the 1st stretch of the 29.87 km Miyapur – LB Nagar line and the second overall (after the 8 km Nagole-Mettuguda section) on the network to be ready. Trial runs on the 4.4 km Miyapur – Kukatpally stretch had started on May 8, 2015 after which L&T extended it further south to the SR Nagar station in October 2015. In May 2016, the concessionaire (L&T Metro Rail) received a Speed Certificate from the Railway Board following which they invited the CMRS to visit and inspect the line in August.

Images of the CMRS’ inspection can be viewed here. 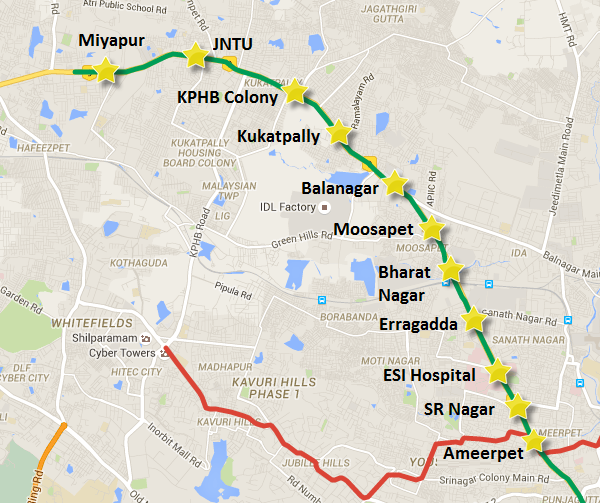 With L&T Metro Rail receiving clearance from the CMRS, it can now choose to start operations after consulting with the Telangana government on an appropriate date.

In the past I’ve highlighted how both the concessionaire and state government have shown little interest in starting commercial operations as both this and the 8 km Nagole – Mettuguda stretches are unconnected and are not expected to bring in huge crowds. Now as per a report in The Hindu, there are various other issues that need to be ironed out prior to operations commencing:

Altogether, the metro rail authorities are ready to start operations for 20 km, provided the government and L&T HMR sort out some ‘issues’ causing serious concern among both sides. These are security issues, last mile connectivity, compensation for delay in providing right of way and so on even if different dates are being bandied about on when the services will be starting.