On October 4, Uttar Pradesh’s Chief Minister and India’s Urban Development Minister unveiled the foundation stone for Kanpur’s Rs. 13,721 crore metro project at an event organized at the Brijendra Swaroop Park in the city. The project was approved by the state government in March 2016 and by the central government shortly after in May.

Although different political parties are claiming credit (or discrediting others) for the project in the run-up to the 2017 state assembly elections calling it a gimmick, behind the scenes, the Lucknow Metro Rail Corporation Ltd. has effectively kick-started the project. They recently opened the financial bids for Detailed Design Consultant contract to shortlist SYSTRA and are in the process of finalizing a smaller civil contract for constructing a boundary wall & developing land for the project’s depot at Polytechnic. In essence, the project is ON and tenders for the Line 1’s construction can be expected to be invited in the coming months. 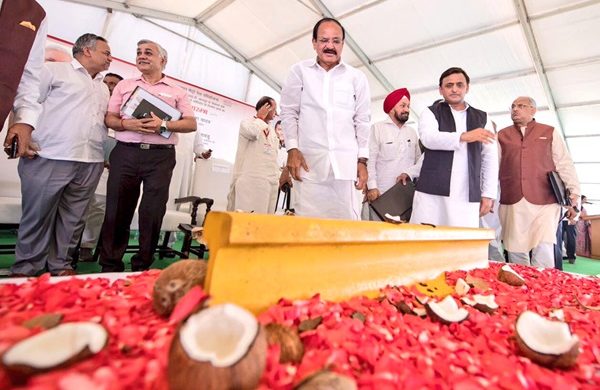 Kanpur Metro’s information page contains all project details that I’m aware of, but to recap:

The 9 km IIT to Moti Jheel section has been designated as a ‘priority corridor’ and will be first developed, just like the 8.48 km priority corridor between Transport Nagar & Charbagh in Lucknow which is expected to start commercial operations in March 2017.

One Response to "Foundation Stone Unveiled for Kanpur Metro Project"