The Nagpur Metro Rail Corporation (NMRCL) has awarded ITD Cementation Ltd. with a contract to construct 10 elevated metro stations on the 10.041 km Lokmanya Nagar – Jhansi Rani Square ‘Reach 3’ section of the metro’s 18.557 km east-west line. The NMRCL had invited bids for this package in May 2015 and estimated it to cost roughly Rs 180 crore. 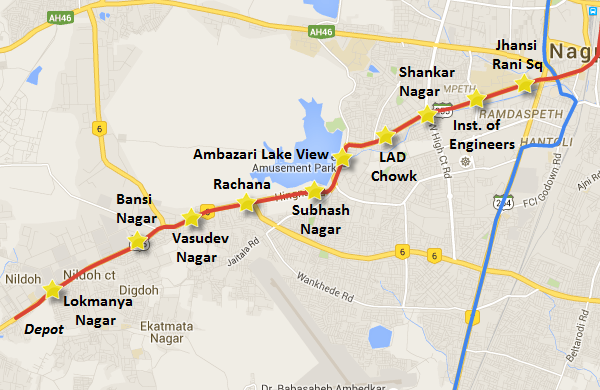 Among these, the Ambazari Lake View station will be developed as a tourist spot with retail development and glass walls running along its entire length. It’ll also have a viewing gallery and apparently transparent flooring as part of its design.

Afcons Infrastructure had emerged as the lowest bidder for this section’s viaduct package in April 2016, but their bid was challenged by the Tata-YEC JV who had been disqualified by the NMRCL on experience parameters. The JV then obtained a stay order from the Nagpur bench of the Bombay High Court, but the Supreme Court set it aside in favor of Afcons and ruled that there are qualitative differences in constructing intercity and metro projects. As per some sources, Afcons Infra has subsequently received work-orders, but I’m waiting for an official confirmation.

Coming back to the stations package, piling work can be expected to start as early as next month. ITD Cem is expected to soon make an announcement on the BSE/NSE and that’ll reveal the contract’s actual value.