CEC-SAM JV – the contractor for all 3 major civil packages in Noida last month launched a record 218 U-girders for the under construction 30 km Aqua Line connecting Noida with Greater Noida. This beats their previous record of 200 which they accomplished in May. Each girder is typically 27 meters long, weighs 160 tons and when placed next to each, 218 girders converts into a twin viaduct of approximately 2.94 km.

As per Anuj Dayal, the DMRC’s spokesperson, who never credits the contractor:

In one section of the under-construction line, which has been divided into three sections, we have launched 120 girders this month. This is the highest so far. This is the maximum number of U-girders ever launched in any Metro corridor in India within a month.

The latest feat to have been achieved by DMRC will significantly expedite the progress of construction on the corridor. We have been able to accomplish this phenomenal task in close coordination with Pramit Garg, Project Director, his team of engineers and Noida Metro Rail Corporation (NMRC). 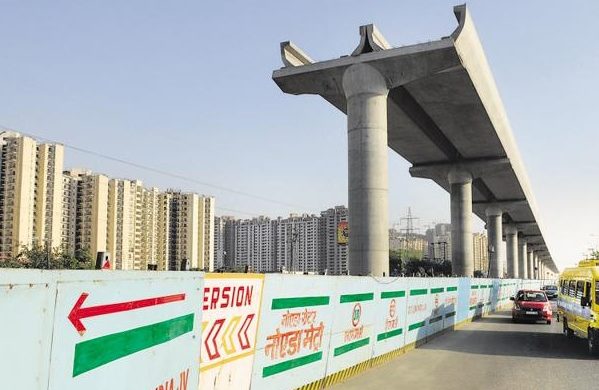 Transportation of material from the casting yard to the site has always been a challenge in India and one of the primary factors which determines whether U-girders or smaller segmental boxes will be used to build a metro line. In Noida and Greater Noida’s case, its wide & unencroached roads allow U-girders to be transported throughout the day with the help of escort vehicles. Here’s a recent image I tweeted out. Check out the link in it for a nice video:

Just another U-girder on its way to getting launched for #Noida Metro’s viaduct. Recent video shot in Gr. Noida: https://t.co/CHHrvCeUgY pic.twitter.com/hG4bHTcIV7

The first girder for the project was launched in December 2015 – view images and info. As per the DMRC, the contractor has completed building a viaduct of 15 km since the contracts for packages NC-01, NC-02 & NC-03 were awarded in May 2015. Overall, 60% of civil work has been completed and the DMRC expects the rest to be completed by June 2017 so that commercial operations start by the end of 2017.