Shani Wallis over at Tunnel Talk has published an article on the commencement of ground work for building Mumbai Metro’s 33.5 km underground Line-3 project between Cuffe Parade and SEEPZ. Within the article is a list, preliminary at the best, of 17 Tunnel Boring Machines (TBMs) which will be used by the 5 main civil contractors selected in July 2016 for building the line.

Do note that until now, barring the Robbins Company‘s blurb on their Crossover TBMs for Mumbai, no orders have been publicly confirmed by any TBM manufacturer, contractor or the Mumbai Metro Rail Corporation Ltd (MMRCL).

Preliminary list of TBMs ordered as reported by Tunnel Talk:

A couple of data points:

Overall, things are getting exciting in Mumbai. The number of TBMs listed (17) fits right into the 14-20 TBM count that I’ve previously estimated, but is not a final count. In the coming months, after all orders are finalized and factory acceptance tests start to get conducted, a true count of the machines & their type/specs will emerge. As far as tunneling works go, I expect the first few TBMs to start arriving on-site in the second half of next year with tunnel excavation works commencing in or after Q4 2017. 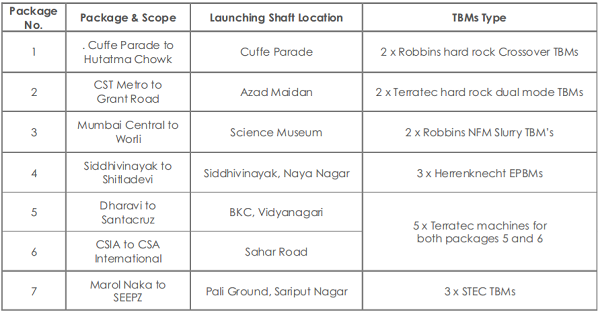