Yesterday, Larsen & Toubro emerged as the lowest bidder for both packages of Ahmedabad Metro’s 6.83 km underground section after the Metro-Link Express for Gandhinagar & Ahmedabad (MEGA) opened the financial bids submitted by different infrastructure companies for its construction.

MEGA had invited bids for the construction of both packages on March 26, 2016 and 3 firms qualified through the pre-qualification & technical bid stages, and onward to the (last) financial bid stage. They estimated & budgeted both packages to be worth approx. Rs 1500 crore, but will end up spending a little more. Here are the price bids submitted by each firm:

Bidders may bid for one or two contracts (i.e. Package UG– 1 & 2), but the successful Bidder will be awarded only one contract, as further defined in the Bidding Documents. 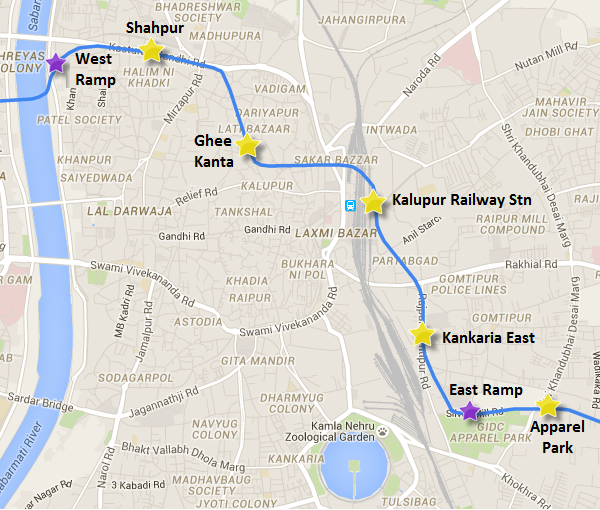 MEGA will now seek the Japan International Cooperation Agency (JICA)’s approval and should be able to award both contracts to L&T and Afcons Infrastructure in January 2017. After the letters of award (LOA) are handed over, initial preparatory work can be expected to begin in March and tunneling work using TBMs in mid-2018.

Overall, Larsen & Toubro and Afcons Infrastructure will have 36 months to finish all tunnels and station civil work. During & followed by that, it would take other contractors and officials anywhere from 1-2 years for completing interior works, track-work, platform screen door (view info) & ancillary sub-system installation, testing and safety inspection. Looking at that, and if all pieces fall into place without any significant delays, then the earliest I expect this section to open up for commercial operations would be early 2022.

In other news, within a week, MEGA will open the financial bids for the remaining 2 packages of the 39.259 km Phase 1 project: