The contractor for the last civil package of Ahmedabad Metro’s 39.259 km Phase 1 project is now known!

MEGA originally invited bids for this package in February 2016, and following a poor response from bidders, re-invited bids in July 2016. Three firms/JVs qualified on to the last stage – Shapoorji Pallonji & Co. Ltd, Pratibha – Ranjit JV and PSP – Gannon Dunkerley JV, and at this time their submitted financial bid values are not known.

Coincidentally, Ranjit Buildcon also won this section’s viaduct contract in January 2016 and completed casting its first pier in December 2016. The 5 stations included in this contract will be located at Motera, Sabarmati, AEC (Ahmedabad Electricity Company), Sabarmati Railway Station and Ranip: 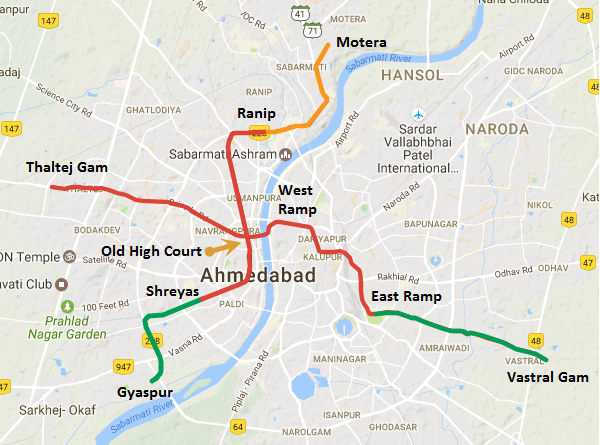 With this development, all sections of the Phase 1 project now have contractors assigned to them – see a list here. In Q2 (April – June), all sections in the above map will turn green. All eyes are now on the 96 coach rolling stock and signalling system contracts; financial bids for those are expected to be opened soon.