Back in mid-April, the Afcons – Transtonnelstroy JV team in Kolkata began tunneling works under the mighty Hooghly’s river bed using Tunnel Boring Machine S639, nicknamed Rachna, to build the 16.34 km Line-2’s eastbound tunnel at a varying depth between 11-15 meters. That TBM has now crossed the river’s halfway mark and built a little more than a 1000 tunnel rings since it was commissioned from the Howrah Maidan Station in July 2016.

The Hooghly River is about 460 wide, and at the time of writing this piece, the TBM has traveled a distance of roughly 245 meters on its way to its first stop near Strand Road where a ventilation shaft is planned to be constructed. After it crosses the river near the Armenian Ghat later this month, TBM S640 or ‘Prerna’ – its sister machine will commence its journey underneath the river to build the parallel west-bound tunnel. That TBM made a breakthrough at a temporary shaft inside the Howrah Station’s site in February 2017, and has since cut through the station’s eastern diaphragm wall to approach the DRM building. 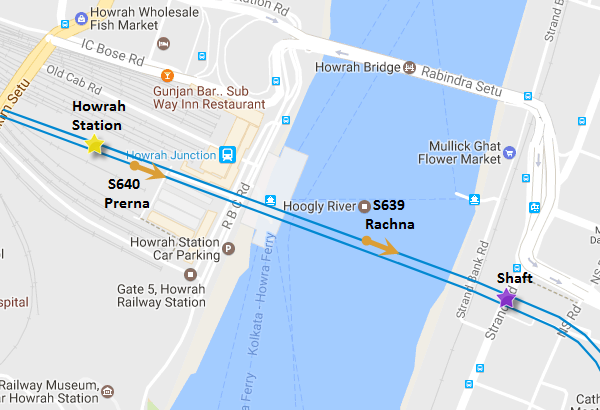 When work started, the local & national news media heralded this milestone as India’s first “under water” and “under river” metro line, but that’s far from the truth. While the Hooghly’s width is impressive and tunneling beneath it is no joke, the fact is that there are other lines around India which can claim the above titles with Kolkata’s existing Line-1 leading the pack:

It’s pertinent to note that the Afcons-Transtonnelstroy JV team is uncertain of what lies beyond the Armenian Ghat with formal clearances yet to be received for building a ventilation shaft near Strand Road. Virinder Kaul, General Manager at Afcons, had this to say:

In any Metro project, tunnels are constructed between two stations. But in this project, we are moving blind into the river with the Mahakaran station nowhere in sight. The boring through the river bed is straight and without hurdles. But thereafter, we only have a knowledge of the alignment. Unless we receive a go-ahead, preparatory work (for the shaft) cannot begin. If the clearances for the next 1.2km stretch between the shaft and Mahakaran station in BBD Bag does not come within a month, the TBMs have to be shut down, the last thing advisable when boring underground.

As he mentioned, approvals for the line beyond the shaft have also still not been received from the Archaeological Survey of India (ASI) since 2009 as the tunnels’ alignment is proposed to pass within 100 meters of three heritage buildings in the BBD Bagh area –  the Beth El synagogue, the Maghen David synagogue and the Currency Building.

So while the line’s 6.70 km primarily elevated section between Sector V – Phoolbagan can be expected to open up in the second half of 2018, the 9.6 km underground section between Howrah Maidan and Phoolbagan, where construction work is yet to commence on 2 stations at Lal Dighi/Mahakaran and Esplanade, can be expected to open up only in or after 2022.