The Haryana Mass Rapid Transport Corporation Limited, which is responsible for all metro construction activity in the state of Haryana, has published a notice inviting bids for the preparation of a Detailed Project Report (DPR) for a new 17.11 km metro line connecting Subhash Chowk to Gurgaon Railway Station.

In June 2016, the Haryana government had appointed the Delhi Metro Rail Corporation (DMRC) to conduct a study and prepare a techno-economic feasibility report (TEFR) for this line including two others to connect Narela – Kundli and Gurgaon – Old Faridabad. While the Narela – Kundli line’s DPR has been approved, the other two lines are still in the concept stage.

The proposed alignment of the Metro link is from Subhash Chowk to Hero Honda Chowk, cross NH-8 at Hero Honda Chowk and will continue towards Basai road crossing from where it will take right turn to Neki Ram Road and reach Sector 4-5 crossing and will reach Gurugram Railway Station via Railway road.
– link to notice

Based on the above description, here’s what this proposed line’s alignment would look like in green – 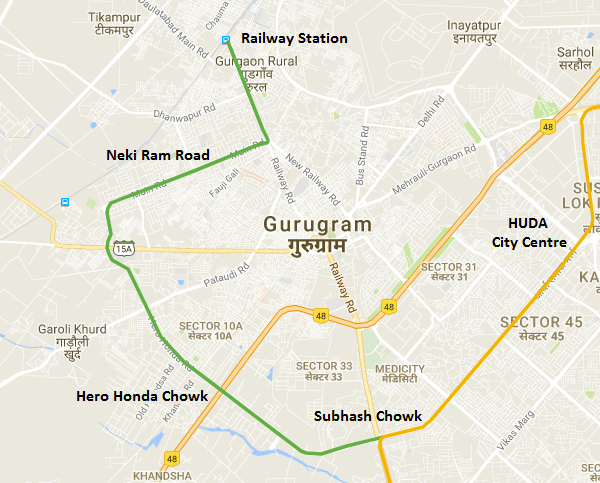 Earlier this month, Haryana’s Chief Minister met with HMRTC officials and discussed this metro line’s route, but its alignment doesn’t match up with what’s described in the RFP document. Perhaps the event photographer didn’t capture all discussed routes? In any case, the firm will have to primarily stick to the route described above and prepare alternate alignments for HMRTC’s consideration.