Yesterday, the Haryana government’s cabinet led by the Chief Minister approved Delhi Metro’s 4.86 km extension into Kundli in Sonepat District at an estimated cost of Rs. 1210.25 crores. This elevated extension of the Red Line from Narela will feature 3 new stations at Narela Sector A5, Kundli and Nathupur.

The line’s Detailed Project Report (DPR) was prepared by the Delhi Metro Rail Corporation (DMRC) who submitted it to the state government in early 2017. The section’s construction will be financed by the state and central governments at a ratio of 80:20, with the state government contributing to Rs 968.20 crore as its share. The state funds will be contributed by the Haryana Infrastructure Development Board (50%), Haryana Urban Development Authority (20%), State Government (18%) and the Haryana State Industrial and Infrastructure Development Corporation (12%).

The state government & DMRC have not released this section’s alignment, but it will most likely look similar to this: 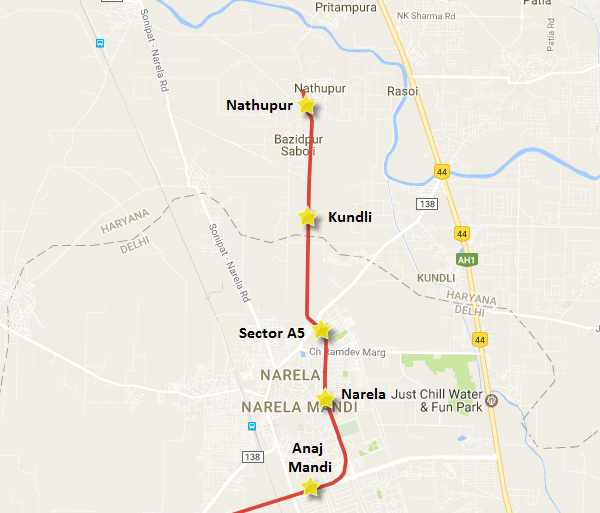 Prior to this, the Red Line in Phase 4 was going to be extended by 21.73 km between Rithala – Bawana – Narela featuring 16 stations. With this development, the line will now be extended by 26.59 km through 19 stations. The Phase 4 project has now grown from 103.93 km to 108.79 km, and in the coming years, the approval of more extensions into Haryana (Gurgaon, possibly Faridabad) and Uttar Pradesh (Ghaziabad) are expected to make the project around 150 km long with the Delhi Metro’s network breaching the 500 km mark.