So back in late-March, the Delhi Metro Rail Corporation (DMRC) published a notice inviting Express of Interest (EoI) bids from companies to appoint a consultant for conducting a hydro-geological study on the upcoming underground corridors of the 103.93 km Phase 4 project.

The basic scope of this key pre-construction activity is to identify the impact due to the:

Within that notice, is this brilliant detailed table of Phase 4’s lines which indicates their lengths (elevated, underground) as well as the number & characteristics of stations. The lengths of the corridors can be expected to change marginally by the time detailed designs are prepared and civil bids are invited, but this can be taken as a good benchmark: 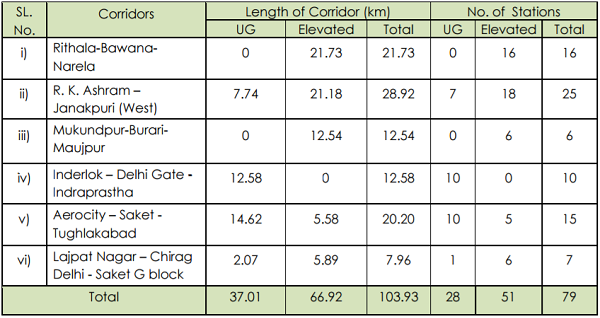 Also included within the notice is this Phase 4 map which is said to have been updated in January 2017, around the time when the project got approved by the Delhi Government’s Cabinet.

This map was prepared on top of their map for Phase 3, and a higher resolution can be viewed here or within the notice.

The biggest take-aways, both excellent, include:

The project was approved by the Delhi Government’s Cabinet in January 2017 and has since then been waiting for the Central Government’s approval. There’s still no word or confirmation on its funding split and which external agency (is JICA still onboard?) is going to provide a loan to fund it. Meanwhile, behind the scenes, consultants are currently conducting various pre-construction surveys, such as geotechnical investigations, topographical surveys and soon a hydro-geological study. Data captured from these activities will help prepare detailed designs, cost-estimations, and will be included in the tender documents whenever the DMRC invites civil construction bids.

Note: Official line colors have not yet been assigned.